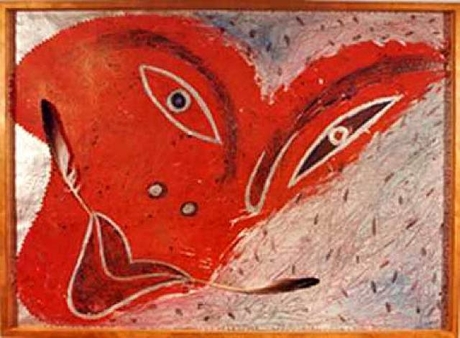 A work linked to Michael Buthe
Alexander and Bonin starts the fall season with Secrets, a solo exhibition of paintings by Michael Buthe. The exhibition’s title is derived from the two largest paintings in the exhibition Le dernier secret de Fatima.
Michael Buthe’s work was widely exhibited throughout Germany from 1968 until his death in 1994.
A contemporary of Sigmar Polke, Buthe lived the majority of his adult life in Cologne and was a professor at the Kunstakademie, Düsseldorf from 1983 to 1994. Beginning in 1970, he spent part of each year in Morocco and had solo exhibitions in Kathmandu and Kabul.
Buthe’s installation works in the 1970s are true examples of the Wagnerian concept of ‘Gesamtkunstwerk’ in that they combined a visual environment along with performative elements.
Perhaps the most widely known, Hommage an die Sonne, was made for the 1972 Documenta V which also included Paul Thek’s Ark, Pyramid. Over the course of his prolific but truncated career, Buthe produced a body of drawings, paintings, sculpture, photographic works and ‘tagebücher’ as diverse and encompassing as his installations.

A universe that is exuberant and dreamlike, extravagant and profane emerges from Buthe’s paintings. His frequent use of gold breathes something both precious and tawdry into this cosmos, intimating a transcultural, visually captivating, and mentally stimulating voyage.  The forthcoming exhibition at Alexander and Bonin will feature two of his most transcendent works. These paintings take the form of 15 foot wide triptychs – the left and right panels are fields of star-like forms on blue or red grounds with a central, vertical panel executed in silver or gold leaf.

The title Le dernier secret de Fatima references the last of three secrets the Virgin Mary is said to have entrusted to three young Portuguese shepherds in an apparition in 1917.  Two of the secrets were released by the Vatican in 1941; the third remained a matter of speculation until its publication in 2000.  During Buthe’s lifetime this pair of triptychs was exhibited at Galerie Vera Munro, Hamburg, 1986; Louisiana Museum of Modern Art, Humlebaek in 1988; and Museum Bochum in 1991.

Buthe’s use of abstract patterning and symbols is concurrent with a use of primal images (figures, faces) throughout his work.  The exhibition at Alexander and Bonin will also feature Landschaft (Spanische Energie), a 1985 painting whose countenance is further embellished by collage elements of fabric and a pitch-fork. A selection from Steine, Hommage for Ramon Llul, 1991/92 photographs of stones which Buthe over painted will be exhibited on the gallery’s second floor.

Buthe’s work has come under re-examination in the past several years.  In 2009 Michael Buthe: The Angel and His Shadow was presented at Ernst Barlach Haus, Hamburg and at the Arp-Museum Bahnhof Rolandseck, Remagen.  Approximately 20 works by Buthe were included in Intense Proximity, the 2012 Paris Triennale.  Buthe’s 1992 installation for Documenta 8 was recently acquired by and exhibited at Kolumba, Cologne. Two of his works from 1969 are currently on view in When Attitudes Become Form: Bern 1969/Venice 2013 at the Fondazione Prada.
HTML Comment Box is loading comments...
NEWS AND FEATURES
News & Features Around The World