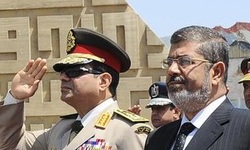 El-Sisi and Morsi
Muhammed Morsi was the president of Egypt before hard fate shoved him away into jail. But he says he is still the president despite what has happened to him and describes his experience as a kidnap directly to his captors. He was the boss and el-sisi and others who conspired and threw him under the bus were his subordinates.
"I was kidnapped by the military and those who removed me had committed treason against the nation. Military coup should eliminated and those responsible for shedding Egyptians' blood be held accountable".
Morsi knew what happened to him. The problem he does not seem to understand is that his captors have taken over the power from him, having successfully taken away his authority as an elected president.
What happened to Morsi was inhuman treatment and the most depraved expected of civilized humans in the 21st century. When it happened to Gulliver, it was from one of the stories by Jonathan Swift describing how inhuman humans can be toward achieving selfish agenda. Gulliver had employed people he picked up in the course of a voyage to work with him. But the same people bound him up, seized his vessel and dropped him off the coast and careless of whether he lived or died.
Another experience that captures Morsi's situation is a story told by Samuel Taylor Coleridge in The Rime of the Ancient Mariner about a sailor who shot and killed an innocent albatross for no just cause. The only difference here is that Morsi is still alive and his accusers are looking for a way to hang him. But the story that perfectly fits Morsi's is the Gulliver's story and his the experience that killed in him further interactions with humans like him, after with animals that he saw in better and humane interactions in comparison to those God said he created in his own image.
The happy ending to Gulliver's experience is its showing that humans are not the same. Just as some dumped him to die in a no man's land, so was his encounter with another who led him back to his wife and child after he was sore afraid to reunite with his family, consequent his experience in the hands of his subordinates and his subsequent experience in the animal kingdom. However, the similarity between the animals and humans is the natural tendency to block anyone they consider as strangers from infiltrating their rank and file. Else, Gulliver would have remained with the animals and never returned to the human community.
El-Sisi and his co-travelers in Egypt have shown that they are in their own world and their act against Morsi is their own conspiracy to protect their self interest and not Egyptians' interest. El-Sisi had the power with the control of the armory, the armed forces took out Morsi and put him in jail. Morsi was right when he said he was removed through a coup.
Morsi was a little lucky that he was allowed to form a government before he was kicked out. In Nigeria, Moshood Kashimawo Abiola was unluckier. He was disallowed from assumption of office by his own closest friends; put in jail and died the day he was to be released from jail for the continuation of talks to determine his fate. The question about Abiola was that no matter his sin or crime, when his friends in the military knew they disapproved him for the office, why did they allowed him to contest?
If Abiola had been told that his own close circle of friends would be his nemesis, he would have disbelieved it. The same was applicable to Gulliver whose employees he gave source of livelihood based on mercy dug him in and the albatross that was fed by the sailors as he appeared day after day and suddenly shot to death.
A lesson here is that it is better to be wary of those who are close to us in the same circle than worrying about those we think are enemies, because they criticize us for our own good.
Widget is loading comments...
NEWS AND FEATURES
News & Features Around The World