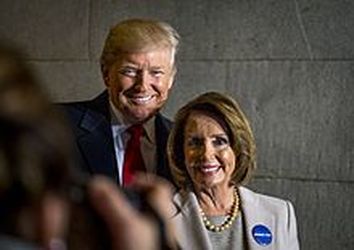 President Trump and Pelosi
Rep. Nancy Pelosi, (D-CA), minority leader of the house of Representatives, prayed on Wednesday for President Donald Trump's success as President,  and for his family's safety.
According to news reports, Pelosi said it is all about the family, and that it is for the family that they are all in Washington.
"And so, I prayed for Barack Obama and i continue to pray for him and i pray for Donald Trump, that his presidency will be successful and that his family will be safe.It is about family."
Pelosi's statement followed Speaker Paul Ryan's words that an attack on one Congressman is an attack on all of them.
Ryan and Pelosi spoke at the Congress, after news surfaced that the shooter of Rep. Steve Scalise at the Congress baseball practice ground on Wednesday, had asked whether the men at the ground were Republicans or Democrats, before he began shooting.
The news of the shooters questions about the identity of the party the men on the ground belonged before his shootings had suddenly united members of the Congress. Many of them have reportedly said that no one has come to the Congress wearing red or blue button, and that they may disagree on issues, but not to the point of resorting to killing. People have begun debates about how long the sudden unity among Congressmen and women will last following what is now termed as Wednesday's shooting and attack on the Congress.
However, Police have not ruled Wednesday's shooting as assassination attempt, because investigations have not been concluded. The NBC News Special earlier said that the Congressman had left the surgery and in high spirit. But the Fox News has reported that the congressman is still in critical condition.
NEWS AND FEATURES
News & Features Around The World