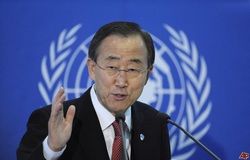 ban Ki-Moon
One dimension has become manifest in major civil wars in African countries that there is hardly a conflict without a neighbor stoking the fire. This was the trend three American high school students observed and noted in their papers at the 2003 4th United Nation's Model Conference on human rights, population, sustainable development, justice, peace and security, as related to Ivory Coast then. It has since become a wider issue with Charles Taylor's involvement in Sierra Leone and sentencing to 50 years imprisonment. Now, like these students' writing of 2003 that finger a neighboring country stoking the fire in Ivory Coast, fingers are now being pointed at Uganda and Rwanda for the trouble in DR Congo.
The three students who wrote on Ivory Coast were namely Muhammad J. Shakur, Hulay Dukuray and Amienata Dukuray. Each wrote on a different subject. Muhammad Shakur wrote on Religious Intolerance, Hulay Dukuray on Human Rights of Refugees and Amienata Dukuray on Multinational Terrorist Groups. One issue united all the three different papers and it is that one country in West Africa when Taylor was leader was fingered as having stoked the fire in the war in Ivory Coast.
Muhammad wrote "The two main religions in Ivory Coast are Christianity and Islam. Because of an insurrection by Northerners, the Southern half of the country is controlled by the government, while the northern half is controlled by the Muslim rebels. The Muslim rebels are fighting against the Christian government because they wrongly accuse the government of discrimination, injustice and inequality. The government of Ivory Coast has always supported equality and justice and does not discriminate against any religion or minority group. The neighboring countries such as Liberia are supporting the Muslim rebels."
In her own paper, Hulay Dukuray wrote "The Ivory Coast is gripped by war and the Ivorian government of Laurent Gbagbo believes that the neighboring countries are supporting the rebellion."
In her paper, Amienata Dukuray wrote,"The Ivory Coast is the world's biggest cocoa grower. It is also rich with timber and diamonds, but it is suffering the ravages of a rebel insurrection against Ivorians and their government. The legal Ivorian government led by President Laurent Gbagbo is based in the Southern part of the country, a region populated by Christians and animists. The rebellion is led by Northerners who are mostly Moslems. Muslims comprise about 25% of of the Ivorian population and wrongly accuses the government of discrimination against them. Recent investigations show that Liberia, a neighboring country, is assisting the rebels in their insurrection.
No Liberian leader had been tried for involvement in the war that was fought in Ivory Coast. But the world knew that Taylor was the one in power in Liberia, the period war was fought in Ivory Coast. Although, Taylor had not been tried for involvement in Ivory Coast, but his involvement in Sierra Leone had put him behind the bars.
Muhammad Shakur, Hulay Dukuray and Amienata Dukuray are Moslems and their writing is objective enough for one to understand they have no reason to wish to support any side in the Ivorian conflict of the time they capture in their respective paper.
Of course, Taylor is away and cannot now be accused of stoking the fire in DR Congo, where the UN has found that Rwanda and Uganda have involvement in the civil war in that country. The question this raises is why do leaders ensure peace in their own country, but choose to create chaos in other countries?
Although, Taylor did the same in Liberia that he did in Sierra Leone that led to uncountable deaths and mutilations, both the Uganda and Rwanda leaders also had taken their country through a war period. But now that their country is enjoying relative peace, why can't  they allow Dr Congo to enjoy the same peace? Should not Taylor's end of the road scenario be a lesson to leaders in Uganda and Rwanda?