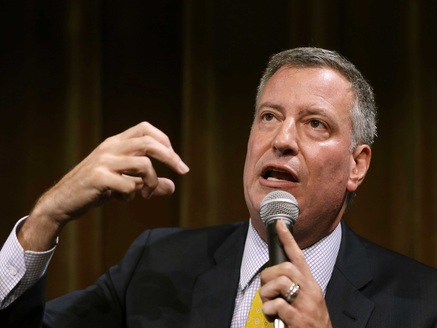 Mayor Bill De Blasio
Will New York City residents see a rent freeze this year or will the landlords achieve their aim for nine percent rent increase? This is the question that no one has answered, despite two major housing events highlighting the importance of housing in the city on Monday. The first event was Mayor Bill De Blasio announcing his administration's housing plan, and the other was the city's rent regulation board's preliminary meeting, which will determine whether there will be rent increase or freeze.
The mayor's housing plan was widely publicized and the other rarely mentioned in the media. Just as the mayor presented what the media had described as mouth watering housing ambition to the public, landlords and tenants gathered at the Customs House at 1 Bowling Green Station - venue of the rent regulation board's meeting - each wishing to know whether there will be rent increase or freeze. The landlords will favor an increase as much as nine percent, but tenants want a rent freeze.
Tenants are complaining of too high rent in the city and they are lobbying for a rent freeze, while the landlords say that the cost of maintenance is too high for a freeze. People say that Mayor Blasio had mentioned that he would like to see a rent freeze in the city this year. But on Tuesday, the mayor was silent about a rent increase or freeze. Instead, he presented an ambitious housing plan with details not yet available. The rent regulation board's meeting is expected to make its decision public in June.
The two development about housing here on Tuesday highlights the importance of housing in New York City, where the rent is skewing for tenants for its sky high phenomenon. Therefore, prior to Mayor De-Blasio's outing for his big housing plan for the city, many New Yorkers have been asking about what the mayor will do about high cost house rent in the five boroughs. Did the mayor's outing and talk about his search for solution resolve the rent problem faced by most city residents?
People say the mayor's plan is a long term goal, while city's residents with rent burden to pay rent burden occasioned by economic downturn want immediate resolution. One of their expectation is a rent freeze. Towards this end, postals were posted in trains asking residents to show up at 1 Bowling Green in support of rent freeze with optimism because the mayor has spoken in favor of it. But the mayor's announcement shows he has a goal for affordable rent in the city that is different to residents' expectation for a freeze.
Sources said that the mayor is presenting a middle of the road policy, walking between tenants and landlords to avoid landlords walking out of rent regulation plans capable of putting tenants in jeopardy.
According to the New York Times, the mayor's plan projects $8.2 billion in public funds to a 10-year housing plan and officials are hailing the plan as the most ambitious in the city's history. But the tenants are watching and waiting for the outcome of the rent regulation board's meeting amid questions
of what people think about the mayor's plan to turn the city into a housing Eldorado against residents wish for a quick and fix solution to the rent problem in the city.
Tenants say that rent is too high in the city and hardly there is one bedroom apartment going for less than $1 thousand. While landlords say the high rent is justifiable for maintenance reasons.