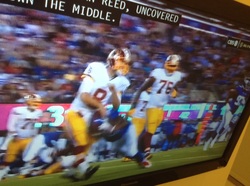 Red Skins were all over the pitch but the Giants' defense was too much for them.
New York Giants drubbed the Washington Redskins 32-21, in a match played at the MetLife Stadium, New Jersey, on Thursday. The Giants in white and blue jersey led comfortably 12-0  from the first quarter, which they won hands down.
The second quarter opened with the Red Skins looking for an opener, but the Giants defense was too hard for them to crack through. The Redskins  pulled through with three scores in the first part of the second quarter, while the Giants also added three score, and brought the score line to 15-3 against the Redskins. The Redskins succeeded at earning three additional points before the end of the second quarter, and caused a change in the shoreline to 15-6 at halftime.
The third quarter opened with the Giants determined to hold to its lead and the Red Skins aiming to nudge ahead and equal or surpass the Giants. The Redskins came on the offensive, while the Giants defended its lead and at same time on the offensive ensure the Redskins dud not turn the table.
The Giants added three points early in the third quarter, despite misses and feelings of disappointment on Eli Manning's face, and brought the score line to 18-6.
The fourth quarter resumed with a good effort by the Giants that resulted in a somersault by a player. This was followed by a touch down in the second minute of the quarter still by the Giants.
The Redskins earned a touchdown three minutes and some second to the end of the fourth quarter! it is now 25-14. the game becomes tougher ending in 32-21, a clear win for the giants.
NEWS AND FEATURES
News & Features Around The World