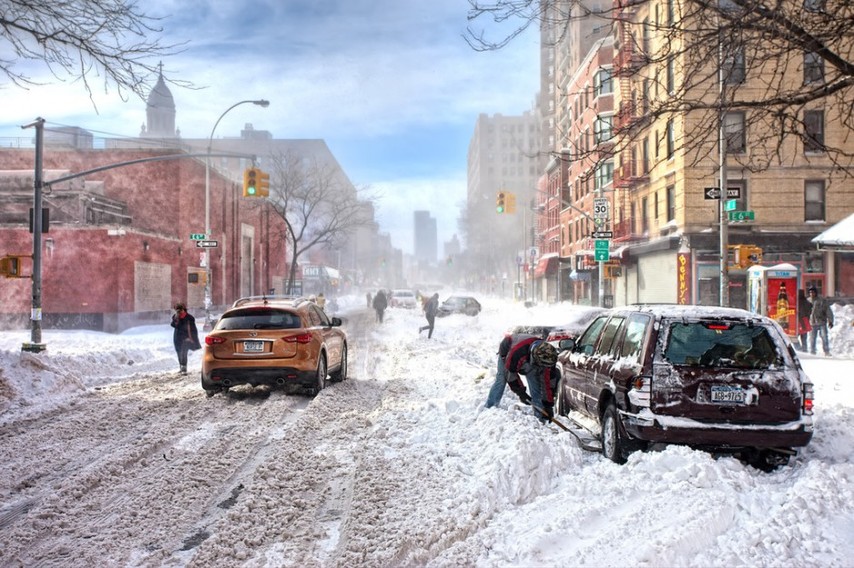 A street in the city after snowfall (Courtesy:lostmanproject.com)
Snowfall of Thursday through Friday morning has transformed New York City and other parts of the North East of the United States. Everywhere is buried in white flakes of snowfall.
People who went to work on Thursday struggled to return home and those who went to work on Thursday night managed to return home Friday morning.There is a deluge of workers who cannot venture out of their home on Friday morning to go to work.
The streets are completely deserted with cars parked on roadsides buried in snow flakes. Few people on the streets are those looking for ways to get to work or returning from work and people shoveling snow to create walk paths amid almost 8 inches of snow accumulation.
People view this weekend snow devastation as a reminder of of the Hurricane of 2011. There were warnings; the new mayor Bill De Blasio immediately swung into action after his swearing on the first day of the year ensuring that everything were in place to tackle the snowfall that had forecasted. All trains had been reverted to run local and residents asked to exercise caution to avoid avoidable calamity. All schools had been shut from Thursday afternoon, two hours away from the beginning of snowfall and would remain closed through Friday. Employers concerned about transport difficulties allowed workers to get out in time to arrive home before the snowing.
Interviewing for this story is a forgone conclusion as everyone here sees what has happened and no one experience can be said to be extraordinary other than that the new mayor assumes office and he is welcomed to work by a heavy snowfall. People see this as a signal that the new mayor has a lot of work to do in office.
The common view people share about this time is that it is the Spring season with snowfalls that propels the rich to take vacation away to temperate region and preference to retire to Florida or other regions that don't experience snowfall. No one wants to retire in regions with snowfall; the rich and the poor work toward ensuring a retirement in temperate  regions. People love snow but too much of it is believed to leave the populace in dejection and helplessness. It tasks the city financially and manually to sweep the deluge of snow off the streets after its falling.
Just as the weather has turned lethal in the North East of the United States, the weather reports from some parts of Europe warns against excessive flooding, showing that the Spring season known for its cooling also has its dangerous dimension.