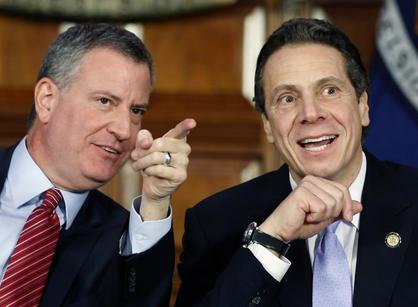 De Blasio and Andrew Cuomo
New York City's Mayor De Blasio does not seem to know how to describe the Chelsea area explosion of Saturday night that reportedly injured 29 people.
​    De Blasio has described the explosion as an intentional act in news reports, but adds that the act has not been linked to terrorism
However, a second device - a pressure cooker - that has been found by the police, few blocks away from the explosion tells a different story, though the mayor and the news media reports of the explosion are finding it difficult to link the explosion to terror.
The pressure cooker reportedly discovered by the police is described as wired and connected to a mobile phone and that it is the type used in the bombing at the Boston Marathon in 2013.
Few minutes after the BBc's report of De Blasio's version of intentional act but no link to terrorism, the BBC reports that Governor Andrew Cuomo has described the explosion as an act of terror, but that no link to international groups has been found. Cuomo reportedly said that the explosion caused enormous damage, and that it was lucky there were no fatalities".
The question that wary members of the public are asking is about what it means to intentionally target to kill or hurt innocent people by using dangerous devices such as a pressure cooker or other devices as bomb. Of course, news reports remind the public that the first time a pressure cooker has been used by terrorists is in the Boston Marathon killings of 2013 and yet no report categorically says that this is an act of terror..
Curious observers are saying that It is possible that government officials and the news media would not have linked the Boston Marathon's pressure cooker explosion to bombing and terror, if there has not been casualties, the encounter between the Boston police officers and the terrorists, arrests and confession.
In efforts to avoid getting caught in the quagmire of Islamic and international terror attacks and the politics involved, politicians and the news media are caught in avoidance of describing a terror act what it is. Some observers are hailing Governor Cuomo for his description of the Chelsea explosion as an act of terror and that the act has not been linked to any international terror group. But the remaining question is whether it is or not an act of home terror.
By the time investigation establishes it is home pr domestic terror, the debate will shift to whether the home or domestic terror has any international connection. It is how politics has affected and changed the way the society views terror acts in the civilized world. No politicians wants to annoy the Moslems among us for political reasons. Therefore the need to be circumspect in determining or naming the type of terror, even after it has been established that an act of terror has taken place.
NEWS AND FEATURES
News & Features Around The World