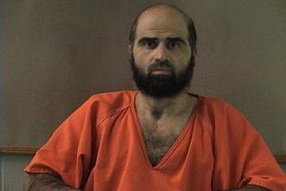 Nidal Hassan
Major Nidal Hassan, the soldier who shot and killed 13 people in Fort Hood, Tex, in 2009, has been sentence to death. Reports say the soldier shows no emotion at his sentencing before a military jury.
He chose to be his own lawyer; confessed to killing the people he gunned down in revenge for the war against moslems in Afghanistan and said that if he bagged death, he would be martyr.
According to Fox News, Major Hassan had one final chance on Wednesday to give a closing argument, before the case went to jury, but he declined and that he continued in in an absent defense he has used his trial began.
Consequently, the trial panel unanimously ruled that Hassan must forfeit all pay and allowances and be dismissed from the service.
He reportedly sat motionless, while the jury's president read the verdict.
NEWS AND FEATURES
News & Features Around The World