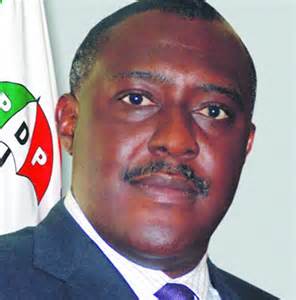 Olisa Metuh
Should a political party's secretary be questioned over why he took money from a National Security Adviser, NSA, for campaign purposes, and for failure to ask the NSA about the source of the money given to him, to do his work as a publicity secretary of a political party?
This is one of the questions that a court siting Abuja, Nigeria, is expected to resolve on Tuesday, when it resumes seating in a case of questionable collection of N400 million brought against Olisa Metuh, Nigeria's opposition party's Publicity Secretary. He had told the country's anti-graft agency, the Economic and Financial Crime Commission, EFCC that the money was for the party's publicity work in the last general elections.
Metuh is fighting to get a bail, but the country's anti-graft agency is fighting to ensure Metuh is denied bail. Metuh was kept in the EFCC's custody from Friday through the weekend, after he had spent over a week in the EFCC's detention. One information said that the opposition party's secretary tore a statement the EFCC's caused him to make under duress, and the report said the EFCC said it would charge its captive for tearing the statement.
Information from the country reveals that Metuh was not the only beneficiary of wide money and materials distribution from Sambo Dasuki, the former NSA to former President Goodluck Jonathan, fingered for the diversion of a large amount of money, that was meant for procurement of military equipment for the war against terrorism.
Dasuki had told investigators that he equally gave two bulletproof cars and a sum of $300,000 to the sitting President Muhammed Buhari, who was then a  presidential candidate, following an attack on his motorcade in Maiduguri, by people suspected to be terrorists.
President Buhari said that it was true that he was given two bulletproof cars by the former NSA, but that he did not receive $300,000. While the spokesman, Femi Adesina, said that as a former head of state, Buhari was entitled to the two bullet proof cars.
The unanswered question is: Was Dasuki the right channel for a presidential candidate and a former head of state to collect his statutory allocation of bulletproof cars? Did Dasuki tell Buhari at the time that Buhari was given two bullet bulletproof cars that the cars were Buhari's normal statutorily allocation? Did Buhari ask any question as to why the two bulletproof cars were sent to him, if Dasuki did not explain the reason the two cars were sent to him?
Observers have queried the continuing detention of the opposition party's publicity secretary as a revelation of the can of worms about the inequality of citizens before the law in Nigeria. They say that equality before the law is on paper in Nigeria, but that it is not in practice.
However, supporters of the president and government officials believe that the accusation of selective justice and inequality before the law is arrant nonsense. Aside from the tenets of the law, supporters of the president believe that the president is above reproach.
Government critics say that the case of Metuh has put the government and its supporters in a bind, and that they are suspecting an effort by the government to curb the opposition. They say that they are not questioning the right of the government to fight endemic corruption in the country, but that the only ground that the government can successfully prosecute anyone accused of taking money for the purpose of publicity for a party during an election is if the government can establish that the money in question has been diverted to personal use, but that it is not right to arrest someone, because of a proof that he has received money from someone being prosecuted for diversion of money.
The accusation against President Buhari's government of selective interrogation in its fight against corruption shows a trait that Nigeria seems to be drifting into the murky water of authoritarianism. One American based Nigerian lawyer, Emeka Ugwuonye, was reportedly detained by security agents at one of the airports in the country on arrival by security agents, on accusation that he had disrespected the president and the commander-in-chief.
Ugwuonye was said to have asked questions in one of his writings about the trend of justice in the country, which he said had become manifestly selective. The chairman of the ruling Party, All Progressive Congress, APC, was also reported to have publicly warned the opposition party members to desist from insulting the president.
And observers say that when criticisms, no matter how adverse it may have become, are viewed as insults to the president, freedom may be on its way out and authoritarianism may be stepping in.