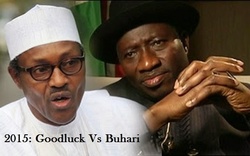 Who will win the next presidential election in Nigeria? Is it Goodluck Jonathan, the incumbent president or his challenger, Muhammed Buhari, former military head of state, former minister of petroleum and former army General? They are the natural questions many Nigerians are asking, as the date approaches for the February 2015 presidential election. Supporters of the incumbent Jonathan wants him to win, while supporters of Buhari also want their candidate to win. But in all election battles, only one winner will emerge.
I had asked my eyes to tell me what will be the result of the election, but my eyes told me he had not seen anything about the result and that as soon as the election result is shown in the terrestrial, I would be notified. I trust my eyes against Nigerian political pundits' analysis. I will explain why.
My eyes had told me in 1993 that Abiola would not be president. But when the results were released and it showed Abiola had won, I challenged my eyes about whether what it saw was the the truth or otherwise, because he had told me in confidence that Abiola would not win the election because he did not see Abiola becoming president. My eyes insisted that he did not see Abiola becoming the president. I had asked my eyes how could that be.
My eyes had told me that he saw Abiola in a magnificent attire, a hat to match, surrounded by his supporters and that Abiola was saying he was determined to be president and that no one could stop him. But as Abiola approached the street with his words, there appeared a sudden thunder from sky, and as the thunder flashed,the ground opened up it struck the ground where Abiola stood and his entire body went into the ground safe his hat.
At this point, my eyes told me that Abiola then realized his life was more important than the presidency he coveted, and began  to seek help, asking people to save him. My eyes told me it was the last he saw of the episode.
My eyes had revealed to me after I had voted and I sought to know what would be the result of the election. My eyes insisted it was what he saw and that as my eyes he would not manufacture what had not been brought to his attention. I was stupefied when the electoral commission began to release results of the election and Abiola was winning. Consequently, I challenged my eyes by asking him whether what he told about Abiola was right or wrong. My eyes insisted that what he told me it was right. My eyes insisted he did not see Abiola becoming president.
Initially I doubted what my eyes told being overwhelmed with what was physically manifest about personalities, interactions and wealth. But after Ibrahim Babangida cancelled the election results, I turned to my eyes that what he showed me had happened. My eyes said it was what God showed that he showed me.
I hardly can trust Nigerian political pundits' and their analysis again,  as all of them belong to one political party or another, and are rarely impartial. Therefore I trust my eyes and I abide with whatever my eyes tells me. I will explain why I trust my eyes, because in the most difficult political situation in the country in 1993, my eyes told me what was different to pundits' analysis. My eyes was right and the pundits were wrong.
Now, onne Nigerian, a pastor or senior pastor in his church in London, Matthew Ashimolowo, said God has shown him who will the Nigerian election, but as a non-partisan fellow, he will keep the revelation to himself. But another Nigerian pastor said in Lagos that the incumbent president will win re-election, but that Jonathan will not finish his term.
The truth is that my eyes have not revealed to me a winner in the election. When I asked my eyes, he said he has continued seeing the incumbent on the throne, and that if there will be any change he will tell me in due course.
NEWS AND FEATURES
News & Features Around The World