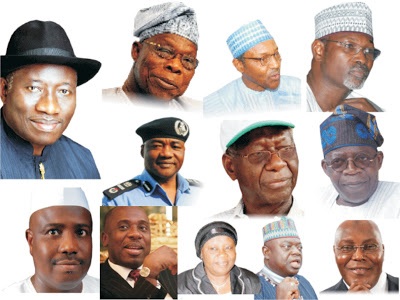 The news report of an attack on Kano Central Mosque that killed scores of innocent people was not the first blast Nigeria had witnessed from the soulless Boko Haram infidels. It may not be the last, because rather for opposition politicians to cooperate with the government to deal Boko Haram a blow, they are busy struggling with President Goodluck Jonathan over control of the wheel of the nation's vehicle.
All the blasts and kidnappings  Boko Haram has executed against innocent people in the country is a reminder of the journey of Nigeria as a nation like an accident vehicle that has never find its course and its occupants continually suffering bloody blows.
One would have thought that Nigerian leaders have learnt a lesson from the civil war and inglorious past of adventurers in power,  but events have shown that they have not and that they are all still adventurers.
They are still fighting over who sits in the nation's presidential seat and the nation is nose-diving and those that are asking the country ungovernable are blaming the president for being inactive. Yet nothing shows that any of those struggling to occupy the number one seat has any idea about what to to help salvage the country and Nigerians from continual hard life and laborious life without compensation.
It is a miracle that Jonathan has not embraced acts of unconstitutionality to defend the country from the war within and without.
Senator Ndoma Egba said that there is no law that prevents law makers from scaling the fence. He tried to give legality to illegality. Some others like him who are not politicians have tried to say that for the police closing the gate means an approval to scale the fence, and putting the fault on the police for not allowing certain law makers into the National Assembly as the cause of fence scaling.
But they have not say when two wrongs begin to make a right. If the police IG was wrong for locking out some certain law makers, were some certain law makers not also wrong for scaling the fence? What is wrong in obeying the police and and then go to court and challenge the police for locking them out?
The lesson that I have learnt over the years is that as a subordinate, I don't call the bluff of authority and expect to keep my position. If the authority tells me to do what I feel objectionable, I do it and then protest to the appropriate authority.
Does the constitution allow law makers to break the law for any reason? Ndoma-Egba said the democracy as it is being currently practiced in the country has veered off the path of normal democracy.
Had there ever been a time that the Nigerian democracy was a normal democracy?  Was the drafting of Olusegun Obasanjo from prison by certain military leaders and imposing him on Nigeria a normal democracy? Wasn't that the foundation of the democracy Nigeria currently practices? And hasn't Obasanjo been imposing his own boys on the country, when he could not impose himself for a third term?
Tam David West said Nigeria is sick and that the country is gradually going down and calling on Nigerians to effect a change in next presidential election. How David West think that with his level of education that a change Nigeria has not been able to effect all these years, including his own years as petroleum minister could be effected with an election no one is certain of its outcome?
When David West was minister of petroleum, did he ever advise Muhammed Bunari how to institute education financial aid and social security for all Nigerians by using the enormous God given wealth to help remove life's burden from the shoulders of poor Nigerian parents?
Jonathan was placed to be a Vice President in Obasanjo's scheme, but destiny had pushed Jonathan to be president. Notwithstanding, Obasanjo thinks he can still control the guy about how to go about ruling the country.  And for Jonathan's imaginary acts of disobedience to the Nigeria's Lord of the Manor, Obasanjo is struggling with Jonathan over the wheel of the nation's vehicle and his hands and that of Jonathan are both on the wheel, while Boko Haram and opposition politicians now in agreement with Obasanjo are doing everything to take off the tires to grind the vehicle.
Useless politicians who don't have their heads on their necks and would do anything to gain position by doing follow, follow, (apology to Fela Anikulapo) are strengthening Obasanjo's hands on the wheel against Jonathan.
Opposition politicians have not even articulated any program for the electorate to decide whether to vote for a change or retain the status quo! But every day you hear opposition politicians  saying change is coming without saying what they intend to do to bring about a change, other than abusing the president and seizing every opportunity to dance without music. Some people say they rely on the damage being perpetrated by Boko Haram now wrongly connoted as the the military arm of the opposition to effect a change to have their turn to enrich themselves.
NEWS AND FEATURES
News & Features Around The World