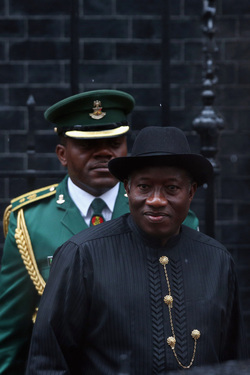 Nigeria's president, Goodluck Jonathan has declared a state of emergency in Borno, Yobe and Adamawa States, north east of the country. The Nigerian government's decision is seen as an effort to exterminate Boko Haram's menace in the affected states. The president said in a nationwide broadcast that the elected representatives in the states will continue in office, while the military commanders and the police will assume control of restoring law and order.
"The activities of insurgents  have been reprehensible, causing fear among our citizens and a near breakdown of law and order in parts of the country, especially north," the president said.
Public opinion approves the Nigerian president's declaration of the state of emergency in the states where Boko Haram has been wreaking havoc, seeking to force the country to embrace Sharia amid a moral declaration of war against the country. It is not clear whether the Jonathan's administartion will seize the opportunity of the moment to eventually remove the elected representatives, whose continiuty has been described as a political carrot by the president toward his own reelection bid in 2015.
William Ross reporting for the BBC in Nigeria said that Mr. Jonathan urged politicians in states to cooperate with the armed forces and the police. In his opinion, the presiedent's position raises a question of what the politicians and law enforcement have been doing, and said that after all, some nothern politicians have been accused of backing Boko Haram.
However, Jonathan has stressed in his statement that state of emergency became necessary in the affected states in view of terrorists' threat to the country's sovereignty, and that a responsible government would not fold its hands and watch insurgents declare war on the country.
Observers feel that the killings and kidnappings occasioned by terrorists'activities have reached an alarming rate. One major disclosure by the president, which observers have feared could have prompted the state of emrgency in those states is the foisting of different flags that are not Nigerian flags in areas under the control of Boko Haram. It is the heart of the current trouble. In the absence of forcing Nigeria to accept Sharia, Boko Haram wants to create its own government by seizing areas currently under its control.
Opposition parties are divided in their view about the imposition of emergency in the three states. The ACN led by Bola Tinubu disapproves imposition of emergency rule, while the CPC led by General Muhammed Buhari has hailed the imposition.
NEWS AND FEATURES
News & Features Around The World