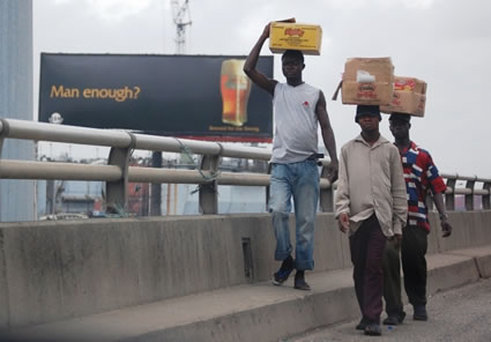 Victims of the struggle bewteen the rich and the Gatsbies(Courtesy: Lola Akinmade)
Every Nigerian is worried about Nigeria. They all want Nigeria to be saved, since the country is now symbolized to represent retrogression. The civil society and the press are on one side in the battle to save the country; elected people and government appointees are on another side and the commoners look up to the two former groups for solution to the country’s problems, because the elected leaders aren’t responsible to the people, but to themselves.
Everyone sees the others as corrupt except self. No one wants to be part of the odious situation that the country has become. Unfortunately, corruption has penetrated the rank and file of all the groups that form the society. It is the truth no one can deny. It is among elected leaders; among the press and the civil society and among the commoners!
Corruption’s ability at penetrating the rank and file of the Nigerian society happened long time ago after the civil war  of 1967-1970. It was manifest in a story told by a kingpin of armed robbers about how he became a robber. A rich guy had driven by after a rainfall and he had spilled dirty rain water on him as he walked by. He was a common auto mechanic. But after that sad experience, he decided to get a car by all means and not walk the street for the rich to spill water on him again. He got a gun and went on his first robbery operation. He became rich after some stints and became owner of fleet of cars, but the law caught up with him and he paid the supreme price, unlike the rich that were springing up among government workers and contractors through the newly found petro wealth.
Apart from the rich who spilled water on the innocent who turned into an armed robber, there were cases of the millions of innocents who had been turned into pen robbers, because of the wish to join a society of ostentation like Pecola Breedlove did in Tony Morrison’s “The Bluest Eyes”, because she wanted blue eyes so that she could look like those she considered as good in the society. The rich in Nigeria are those who ride fine cars, live in mansions, travel abroad on holidays, and will do anything to get the money to satisfy their cravings. Getting the money at all cost is the beginning of the problem for all who have fallen into the dragnet of getting rich and spending beyond their income to acquire fanciful cars and home on a fast lane, while Nigeria has become a victim. It is a life of vanity that large number of people have joined, because of a wish to get rich at all cost.. Corrupt people in Nigeria can be found everywhere like President Goodluck Jonathan’s summation that dreadful Boko haram members are everywhere, including his cabinet.
Therefore, the first assignment for majority of elected officers and government appointees is seek how to get out of financial rot to measure up to family and societal expectations. Yes, the family expects the breadwinner to be able to solve their problems. Even when you are not in government, the family expects you to be eligible financially and materailly to meet their needs. And if you cannot, you don’t deserve respect. The reason is clear: the extended family system is still in vogue and government doesn’t have programs that take care of the peoples’ essential needs; no drive for full employment and unemployment relief is non-existing, no educational guarantee for those who want it, social security and retirement programs are rare and they are threatened by acts of corruption where they exist. A protest has been scheduled for 10 April 2013 by the civil society against the governemnt for failing to pay pension for those who are eligible for it. The program for combating corruption by government has become instruments of political vendetta that is used to punish political opponents and favor political accolites.
In Nigeria, there are no saints and if they exist, they are in minority. They are rare among the politicians and government appointees; rare among the upper class and among members of the lower class who are struggling to climb to the upper class or join politicians and government appointees to become automatic members of the upper class. The real victims of the Nigerian system are the hard working and law abiding citizens who never seek to reap where they have not sown.
Nigeria is rich, but the wealth in the public and private sector have been sucked by members of the upper class who all belong to various societies within the society that will remind literature lovers of events in Scott Fitzgerald's "The Great Gatsby".
The truth about events in Nigeria is a struggle between the questionable rich and the many Gatsbies with little or no room to give attention to the public's well being. Members of the public are thus left to find ways to take care of their own problems amid worsening economic situation and paralysing social problems.