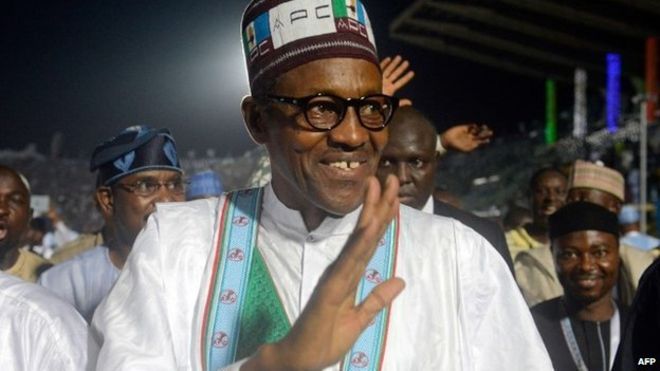 President Muhammad Buhari of Nigeria
Nigeria is on the hot spot, gaining the attention from Britain, few days after the bombing in London.                 Though, the separatism struggle in Nigeria is historically older than terrorism against the western nations.
Ordinarily, no country wants to be in the news for the negative reason that some of its people are demanding for a separate country.
The story of Nigeria's stormy experience in the sad episode dates back to a time before 1967, and leading to the civil war that began in 1967 and ended in the humiliation of the tribe, that dared demanded freedom!
Yesterday, it was treasonable for people to demand freedom or a separate state. Today, the world has become more enlightened and accommodation is being given to people demanding for freedom in civilized countries to vote for them to either remain or go. Why cannot Nigeria be bold enough to show a sense of belonging to a civilization that recognizes the right of everyone to self determination?
These are the thoughts currently in the minds of enlightened Nigerians all over the world who watch their country's leaders, using unnecessary force in addressing the renewed demand of some Ibo people for another country called Biafra, which struggle was believed to have died with the end of the war in 1970.
Many Nigerians think that it is sad to hear that a man deemed as the new leader behind the Biafran struggle is missing with his parents, and the soldiers sent to the east to quell the separate demand for another country are denying the whereabouts of the man and his parents. Having denied the whereabouts of disappeared man and his parents, can the same soldiers deny the death of about 50 people in their zeal to obey useless orders from above?
It is the abnormal stupid trend in Nigeria to silent dissent. Fela Anikulapo Kuti's mother was killed for living with his irrepressible son, whose demand from government for sanity was endless. No one has been arrested for Dele Giwa's murder with a letter bomb since 1986. Moshood Abiola was killed under the same circumstance that the killers are above reproach and are still at large. People are praying that Kanu and his parent's fate will be different.
Real and true healing will begin, when leaders stand up and allows the rule of law to reign and disallow anyone to be taller than the law. Have Nigerian leaders send police after the northerners who ask the Ibos to leave the north, all because the Ibos are asking for another country, that would have been the beginning of real and true healing in Nigeria. Those northerners are still free and Nigerian leaders think it is right to enforce the law with all force by sending soldiers after the Ibos, when those northerners  are walking free.
Northern leaders and their supporters in the South West who conspire to allow the north to be elected leaders must take note of the development in the country and that no tribe should have exclusive access to leadership, and that whoever finds self as a leader must prove to belong to all Nigerians and not to any region or religion.
Click to set custom HTML
Comment Form is loading comments...
NEWS AND FEATURES
News & Features Around The World