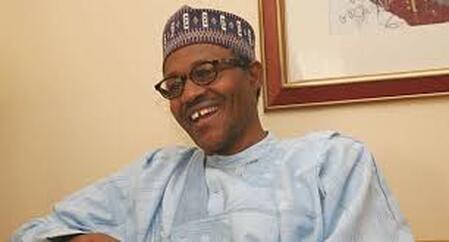 President Muhammad Buhari
Nigerians are unsure about what is happening to their president and their country. Is Muhammad Buhari the same action leader he claims to be or  has claimed credit for past active leadership that does not belong to him? It is a question Nigerians are trying to answer as challenges of ineptitude mount against Buhari's first four year term as a civilian leader and eclipsing his military era credential as an action leader.
Though, reportedly voted for a second term in office in an election marred with irregularities and victory that has been challenged in a court of law by the opposition. Just as Buhari begins his second term on May 29, the Economist magazine reports about half of the Nigerian population has entered into acute poverty under Buahri.
There are cries of economic emasculation by a large number of Nigerians confirming the Economist's news report and the uncertainty that stares Nigerians on the face with Buhari continuing as their leader. Nigeria seems to be under political and economic uncertainty as no one is certain about what will be the outcome of the legal challenge of Buhari's election victory, because his challenger has presented a figure of what he says is the true election outcome, which he says he has obtained from the Independent Electoral Commission's  database. The electoral commission and the government's   have said the opposition may have hacked into the electoral commission's database, when at the sametime the commission's spokesman says that the commission did not count votes electronically!
As Nigerians wait for the outcome of the challenge of the election results, the question remains whether Buhari will show what he calls his active side and not the sleeping side that has made many Nigerians to call him Baba Go Slow. His supporters still trust him as mr. Integrity and incorruptible. He has promised to swing into action. But it leaves much to believed if his earlier assertion that people should not expect so much action in a civilian government in comparison with his military leadership days, because according to him there are hindrances in a democracy caused by consultation processes that make a military style of governance impossible.
The fight against corruption by the Buhari administration has largely failed as the Economic and Financial Crimes Commission, EFCC, has turned into an arm of the ruling party, hounding opposition politicians, while anyone corrupt politician who crosses over to the ruling party is sure to have investigations against him or her slowed down, if not completely killed. Buhari is believed to be surrounded heavily corrupt politicians and seemingly above the law. The EFCC has turned blind eyes to allegations of a national leader of the ruling party, who has allegedly been collecting 10 percent of revenue from some states where he is said to be a god father.
Despite the argument that Buhari has not performed to expectations, many Nigerians are saying he still has an opportunity to rewrite what history has recorded for him based on the ineptitude of his first four years, and that is if his election victory is not overturned by the court of law. The reason is that many people are shocked by the electoral commission's submission that the commision votes manually and not electronically as claimed by the opposition. And that has led to a question about why a country as rich as Nigeria and with many educated fellows will claim to count votes manually in the 21st Century and in  a country of about 200 million people.
On the issue of having been an action leader yesterday and now performing without anything to show that the credit for the action of the past belongs to him, there are Nigerians who believe that the action of the military government of the past for which Buhari was head of state may actually belongs to his deputy named Tunde Idiagbon of blessed memory as events have shown there are no traces of action in Buhari, safe that the bucks stop at his desk and can claim the credit for the period without substance to show for it in his current outing.
People are saying it is sad to hear that Nigeria has moved under Buhari from a rich country that was poor, because Nigerians did not know what their leaders did with the country's oil money, to a country that has the citizens to be among the poorest in the world. Buhari and his supporters are in their own world with a laughable claim of having killed Boko-Haram amid the growth of other worrisome killings in the country that has made observers to accuse the government as having made safety a secondary issue.or no issue of importance at all.  ,
In response, government apologists have mouthed the importance they say that the government places on safe-guarding human lives and property. Yet, Nigerinas are bot certain about what the second term of Buhari will be.