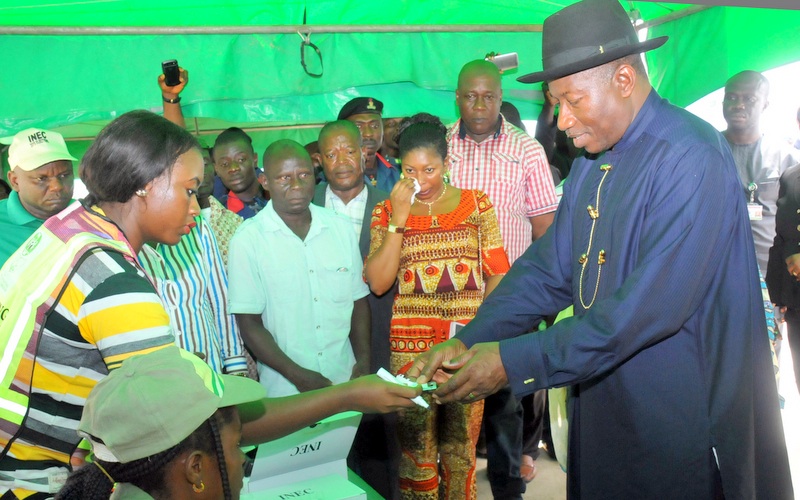 The incumbent president, Goodluck Jonathan, voting earlier today (Courtesy: Nigeria's Daily Sun)
Voting is underway in Nigeria in the country's presidential and legislative elections. The country's president has reportedly voted in his home village with assurance that he would defeat his major challenger, Muhammed Buhari.
One notable development today in the election is the failure of the electronic card reader, which has prompted the country's independent Electoral Commission, INEC, announcing that manual accreditation be undertaken in places the card reader has failed. Thus resulting in the postponement of elections in certain areas until Sunday. Already, Bola Tinubu, a chieftain of the major opposition party, All People Congress, APC, has reportedly called for the election to run into Sunday, while the ruling party, People Democratic Party, PDP, said the disappointment by the card reader in some areas confirmed its fear earlier expressed before the election that the card reader should not be used in a challenging election atmosphere such that Nigeria has. And the opposition had said the ruling party was afraid of electronic card reader, because it would deprive it of a chance of rigging the election.
A Ghanaian resident in New York City, who read about the card reader problem in Nigeria said Ghana had the same problem with the card reader in the country's last presidential election that almost led to chaos.
Another major development on the Election Day is the River state's governor, Rotimi Amaechi's refusal to be accredited in a ward near his home, because he said he did not see the result sheet. The governor was also said to have been turned back on the street by a commanding officer of the Army in the state, who reportedly asked the governor not to go around.
It is being debated whether the governor should have embarked on what is essentially the work of INEC or on walking around polling stations on an Election Day, in what would have amounted to continuity of campaign on Election Day. Amaechi is in the forefront among members of the opposition, who have insisted on a change of power at all cost, and he is the campaign director-general for Buhari, the opposition candidate.
In another development, one of the country's major newspapers published a paper it said it obtained about an alleged plan by the ruling party to swing the election in favor of the incumbent president. Whether it is prudent for a news editor to publish such a document with source unverified on an Election Day is also being debated. Ostensibly, the document has no authorship.
As Nigerians are voting and waiting for the outcome of the elections, the international community stands with them on the wish for a peaceful exercise. Even none Nigerians outside the country ask Nigerians they know about who they think will emerge victorious between the incumbent president and his major challenger. But mostly, the answer to the question has been report of palpable apprehension among supporters of the two major parties, whose candidates top the list of presidential candidates.
As newspapers in the country have said, it is a difficult election to predict and that the analysis is capable of messing up soothsayers who may have predicted victory for any of the candidates, because the race is said to be tight. But observers think by Sunday evening through Monday morning, Nigerians will know who will preside over the country for the next four years.
Observers say Nigerians should hoping for a better future reading reports that describe the country as the most influential and biggest economy in Africa, despite the evil corruption has done to the country and its deprivation of the common people from independence.
NEWS AND FEATURES
News & Features Around The World