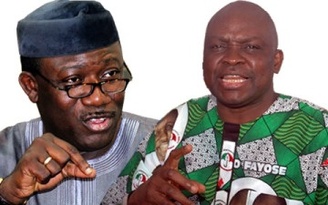 Fayemi and Fayose (Courtesy: Punch)
Wednesday, October 16 2014, is Ayo Fayose's first day as Ekiti State's governor in Nigeria, after his defeat of the incumbent, Kayode Fayemi, an election victory that has frightened the opposition party in the country.
Opposition party's supporters have continued saying they believe something must have hone wrong for the incumbent to have suffered a defeat despite his performance in the state. Professor Wole Soyinka  added his own sense of loss with a description of the incumbent's loss as a mystery.
Consequently, the party's supporters went to court to challenge the eligibility of the election winner. Supporters of the winner emerged in court and reliably flogged court officials - including judges - claimed to have resolved with opposition to truncate Fayose's election. The opposition denied the accusation. But news reports indicate the opposition has filed a last minute papers in. Lagos court to stop the new governor's inauguration, despite the outgoing governor's acceptance of the election results.
The following day after the court drama, one of the men who was in court among Fayose's supporters was hacked to death in his house by yet unknown people. Court officials and supporters of the loser in the election wanted the winner to be arraigned for his supporters' attack on court officials. It later emerged in the news that the Federal Government whose member won the election had decided the court hearing the eligibility case of the new governor in the state would not sit until the new governor may have been sworn. Another report said that it was the country's judicial council that ordered the chief judge in Ekiti to close stop the hearing over murderous development in the eligibility case.