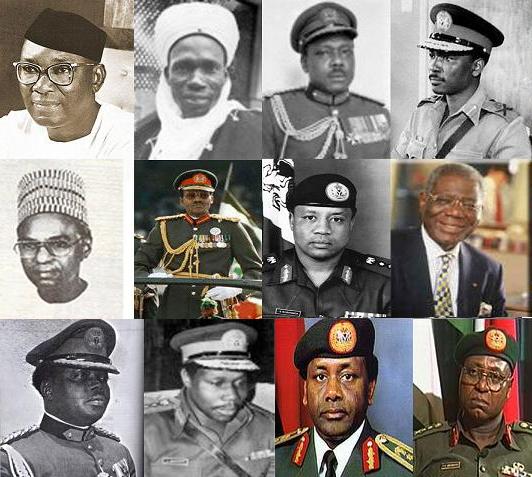 Nigerian leaders, past and present
It is Nigeria's 57th independence anniversary. One will not expect total silence in the corridor of power and among Nigerians, in term of marking and celebrating the country's day of freedom from colonialism.
Like the most abject person on earth, who has reasons to give thanks for just being alive and hoping for a better tomorrow, the country's leaders and some Nigerians, at home and abroad, have reasons to mark and celebrate the country's freedom.
This has always been the case since October 1, 1960, when the colonialists handed over the baton of power to their favorite politicians. The same set of politicians have continued to transfer power to their favorites, including the military guys, who seized power and gave their caucus the access to control and determine the country's fate.
There has always been reasons to give for the wobbling political and economic state of the nation. just like President Muhammad Buhari on Sunday.
To many Nigerians, the independence day in 1960 has seized to be the day that excite Nigerians, because the opportunity to take the country toward the right direction from independence has been frittered. Te day that the military intervened in the country's governance, sacked corrupt politicians, whom they described as ten percenters has also seized to excite, because the military has also frittered the opportunity to fulfill their promises of an egalitarian society.
But before the military messed up their popularity, one officer named Adekunle Fajuyi gave his life for the love of the country's unity. It happened when Aguiyi Ironsi visited Ibadan as a military head of state and mutineers, who sought vengeance for the killings in the first military cornered Ironsi in Ibadan, and Fajuyi said that for the mutineers to get Ironsi, they must first get himself. He was killed along with Ironsi. He saved Nigeria from bloodletting and tribal that would have occurred among the military cadres and politiicians.
What remains for the military guy in and out of uniform and the barracks is the power of coercion that they possess through access to gun power and the bomb.  After they messed up the country as military leaders, they joined the bandwagon for the need to transfer power to the civilians, changed from khaki to civilian dresses and continued with their influence and control.
Look at the list of military leaders, who have rule Nigeria to date: Aguiyi Ironsi, Yakubu Gowon, Murtala Muhammad, Olusegun Obasanjo, Muhammad Buhari, Ibrahim Babangida, Sanni Abacha and  Abdulsalam Abubakar, against the list of civilian leaders who are as follows: Abubakar Tafawa Balewa, Shehu Shagari, Olusegun Obasanjo, Goodluck Jonathan and Muhammad Buhari.
The military caucus and their followers control the country, and they are the people who have messed up the country. For example, in 1993, the country had an opportunity to push away military caucus, when Moshood Abiola, one of the millionaires propped up by the military caucus itself was disallowed from assumption of office after his victory at the polls, the military caucus no longer trusted him. When Murtala Muhammad was killed in 1975, Obasanjo as the second in command stepped, an restored power to Sokoto through Shehu Shagari based on the wish of military caucus. When the bubble busrts again in 1999 after Abacha's death and Abiola was disallowed from assuming office, the military caucus recalled Obasanjo and gave him the mantle.
The same military caucus gave the mantle of leadership to Umar Yar'Dua to benefit the former General Shehu Yar' Dus's family . Jonathan became a leader of circumstance, inheriting everything the military caucus had imposed on the country, including corruption. It was not accidental that another former military leader emerged president in the person of Buhari. At least, Buhari's run for office he was staunchly supported by Obasanjo with all his resources.
What has become manifest is that in the power struggle from independence, the military and the first set of rulers from Sokoto, have forgotten the essence of leadership - to manage the country for the economic benefit of every Nigerian, irrespective of tribe and  social status.
The country stands on a rotten foundation of corruption and the leadership currently fixates on finding solution to the corrupt culture in favor of attending to the needs of ordinary Nigerians. Nigerians displaced in the scheme of things from independence have chosen traveling abroad as solution to problems at home.
For Nigeria to move forward, the albatross must drop, but this may not happen until emergence of new class of selfless leaders, for the propitiation of innocent blood that have been shed by past and current selfish leaders, in their bid to hold to power at all cost.