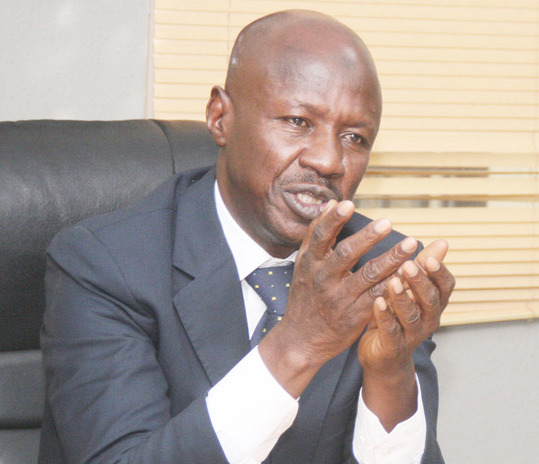 Ibrahim Magu, Nigeria's anti-graft Caesar
It was 365 days in office on Friday for the government in Abuja, Nigeria. There was no drum rolled out, except the country's Caesar of anti-graft body,  Ibrahim Magu, who trumpeted the good job of the Economic and Financial Crimes Commission. Although, Magu says the EFCC has been following due process in the cases before it, observers say his remark that lawyers take money to defend suspects in court or that it is wrong for lawyers to choose to defend suspects in corruption cases and get paid for their work, shows Magu's lack of knowledge for the due process.
The Nigeria's anti-graft Caesar also accuses journalists of getting paid to publish trash against the anti-graft commission. Magu asserts that the anti-graft commission has successfully prosecuted 140 cases and that ongoing investigations in several other cases that involve recovery of money recklessly distributed by members of the last ruling party and government officials testifies to the truthfulness of his own words. Aside from Magu's trumpet, the country's president, Muhammed Buhari  use the children's day celebration, celebrated on the same day, to remind Nigerians about campaign  promises to the youths and makes another promise to fulfill the earlier promise.
Before the 365 days of Buhari's government in office and the children's day celebration, one argument in the country is about the misfortune of a leadership that had thought it was coming rule a country filled with honey, but later discovered that the near empty treasury left behind by his predecessor and that the sudden slump in oil prices have made its own coming another misfortune in the making. Many Nigerians, based on newspaper reports, have said that the country has placed too much emphasis on the fight against corruption and that governing, the real governing of the country, has fallen behind. They show example of how the anti-graft body exercises authority by arresting suspects it puts in jail before commencing investigations.
Government officials are saying that the country is broke. They will blame the stealing by immediate past government officials with one side of the mouth and say the slump in oil price with the other side of the mouth as responsible for the country's misfortune. One truth that present government officials have glossed over and seemingly not ready to address is that revelations about the immediate past government's stealing streaks is a reflection of the foundation on which the Nigerians nation has been built with government officials not just misappropriating funds, but  also recklessly sharing oil blocs among themselves, while ordinary Nigerians become burden bearers.
Many Nigerians are secretly saying that the current government in the country can decide to limit its corruption investigation to the immediate past government's misappropriation of fund, but that until the past illegal sharing of oil blocs are addressed, oil blocs illegally shared in the past are taken away from their illegal possessors and restored by to Nigerians as rightful owners, the root of the Nigerian corruption will remain untouched. Many people are saying they would not be surprised, if investigation of illegal sharing of oil blocs reveal that foreigners may have been beneficiaries of such illegal sharing, which may have been been given away as gifts, to the detriment of Nigeria and Nigerians.
Now, the Nigerian government has resorted to begging. It has begged the Nigeria Labor Congress and its allies to discontinue demonstration against government sudden increase of gasoline price  in the country and it is begging  the people in the Delta region, who have risen up in arms in demand for justice for the past and present disenfranchisement of the people in the region. President Buhari had a cause to have asked why he should be in office at this time of the country's misfortune. And unless the oil prices rise for satisfactory and optimum execution of the 2016 budget, the future is bleak.
When the current politicians in power gathered against the immediate past government  for the 2015 general elections, they had thought they were coming to rule a country with resources to turn the situation on the ground around, but they knew not they were mistaken and that what awaited them would be akin to misfortune. And now Nigerians at home and abroad don't seem to understand fully the problem with their country, though they blame it on the stealing and lack of governance in the country.
Nigerians think judgment may have arrived for all the past leaders, who had connived with others and stole the country blind, but investigations had shown past leaders and members of the ruling party are safe, no matter the amount and the oil blocs in their possessions. No matter, as the face of the government in Abuja, Magu would want a situation, where suspects are accused and taken to court, without the opportunity to defend themselves, and for journalists to refrain from reporting the truth that does not satisfy the type of 'Bolekaja'  (Come down and let's fight) justice system he wants in the country.
NEWS AND FEATURES
News & Features Around The World