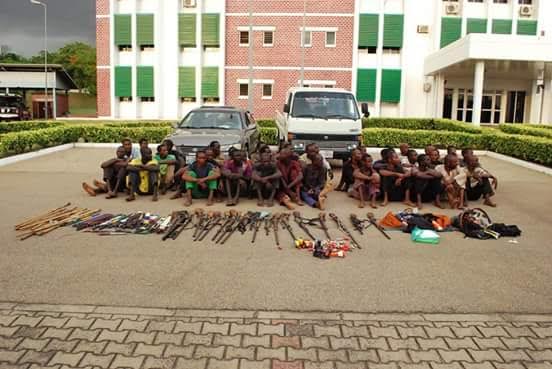 A photo showing some of the arrested herdsmen by Nigeria Military and their ammunition (Courtesy:Facebook)
There are terrors in various shades and dimensions. But one form of terror that the world views as hardest of all terrors is the Islamic terrorism that is perpetrated by groups like Al Queda, ISIS, Boko Haram and  Al-Shabab. In Nigeria, a new face of terror seems to have emerged with Fulani herdsmen.
These herdsmen have reportedly been attacking  farmers in parts of the north and south of the country in the course of their grazing with public concerns. It is not until recently that the menace that the herdsmen constitute is giving opinion makers and the authorities serious cause for concern following the herdsmen sacking of an entire village in Enugu State and killing 40 innocent people.
Some Nigerians are secretly saying and praying that they hope that it is not Boko Haram sect that has transformed into herdsmen. News reports say that these herdsmen have been farmers and villagers. A newspaper report of Nigeria Immigration's statement say that there is no indication that these herdsmen are foreigners. The statement further confuses speculations and fears that these herdsmen may be foreigners.
The service says according the Punch newspapers, "We don’t ask if they (immigrants) are herdsmen or not and we don’t see people coming in with cattle. We have not received reports of people coming in with cattle. When you see someone coming in with animals, we have relevant agencies to check the state of the animals. If you are importing or exporting animals, like in other countries, the port health officials are in charge of that. The NIS lacked the capacity to man the 1,400 illegal routes in Nigeria. There are over 1,400 illegal routes, but the border patrol guards cannot be posted to the illegal routes because they are illegal. You cannot post an official to go and work at a place that is declared illegal, those places are not recognized as border posts. but the border guards patrol the periphery of the borders and prevent illegal people from coming in.We have patrol bases, the guards patrol from one base to the other."
The report said that the Nigerian Federal Government said that it will collaborate with the neighboring countries to contain the violence by the rampaging Fulani herdsmen. The Nigerian military that comprise the Navy, the Army and the Air force were also reported to be preparing for joint operation against the herdsmen marauders. But before the government's announcement approving the military operation, Professor Wole Soyinka had question President Muhammed Buhari seemingly quiet reaction to the herdsmen's worrisome butcheries across the country. Some Igbo senators were reported to have described the herdsmen's activities as a threat to the country's unity.
Already, the herdsmen unholy act is causing division among Nigerians. Some other Nigerians had spoken in the same manner like Professor saying that President Buhari's reaction to the killings by the herdsmen was lukewarm. Others think that President Buhari should not be criticized over the herdsmen's killings. However, the arrests of about 100 herdsmen and seizure of ammunition in their package and hidden away from detection, after they claimed they were on a peaceful mission of grazing, is causing stirs.
The Fulani people comes from the North of Nigeria and are known mostly known to of tribe the herdsmen. They are politically powerful,  known to have influence and control over government affairs in the country.
NEWS AND FEATURES
News & Features Around The World