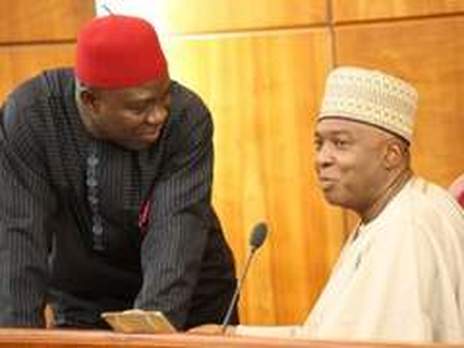 Dino Melaye and Bukola Saraki
Nigerians learned in news report on Monday that the Presidency had intervened in the police ordering of Dr. Olusola Saraki, the senate president, to appear before it, over a crime of armed robbery allegation.
​    Instead of expecting Dr. Saraki to appear before it as it earlier ordered, the police had asked Dr, Saraki to write about what he knrw about the armed robbery case to the police.
According to news reports, police change of mind came in followed a meeting between the vice president, Yemi Osibajo, the police inspector general of police and the head of the country's secret police, held at the presidential villa in Abuja, early on Monday.
News reports said police inspector general refused to tell reporters what transpired at the meeting with the vice president, and the presidency had not released any statement about the meeting as at the time of writing this.
But many curious observers of Nigeria's politics believe that the presidency may have called the police inspector general to order.  Though the matter of police insistence to question the senate president is not completely off the table, as he has been asked to write in, rather than appear at the station.
Many Nigerians have expressed their displeasure on police role in Senator Dino Melaye's experience in police hands, over an allegation that he must have had knowledge about a crime committed in Kogi State, how he was forced into a vehicle in Abuja by police en-route Lokoja against his will, and over an accident that happened on the way to Lokoja, in which police alleged the senator jumped out of the vehicle.
Many Nigerians believe that police has assumed the role of an attack dog for the ruling party and that police is being remote-controlled from Aso Rock, the country seat of power, in Abuja. Many have asked about what would have happened had Melaye died in police hands from the accident on the way to Lokoja.
As if to confirm what majority members of the public had feared that the police had assumed the role of an attack dog, Dr. Saraki cried out to the public and senator colleagues on the information he got from his state that the police had completed an arrangement to indict him in a robbery case, in which he said he knew nothing.
Two weeks after Dr. Saraki had cried out, the police came with an allegation that Dr, Saraki's name had been mentioned by hardened criminals involved in a armed robbery at Offa, and the police showed a vehicle number plate that the robbers used, bearing the senate president's last name and superimposed on the original plate number.
Given that the robbers may have used such tactics as a get away measure, observers believe that police could have carried out its investigation without public knowledge and that police decision to make its initial investigation public was caused by its zealousness to please its masters.
The development has not gone down without political repercussion for the ruling party, as the nPDP that has been meeting with the presidency over the role it is expected to play in the 2019 presidential election has announced its pull out from the meeting with the presidency until the presidency stops tormenting its members. The nPDP said in a release on Monday. Both Saraki and Melaye belong to the nPDP.
Many Nigerians believe that Melaye and Saraki are being haunted for political reasons, and that whatever charges against them are trumped up by the ruling party.