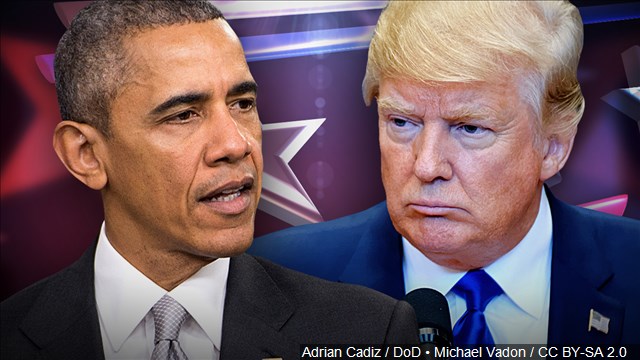 President Barack Obama and President Elect Donald Trump
Every human being has aspirations to become a recognized somebody in life. Some are lucky to achieve their aspiartions, while others are not so lucky.
Some people are without having a thought of what they want in life, but turnout to become super stars, because of birth and life in countries, where empowerment is there to help the willing.
Now, the society have super stars called celebrities, and others who are not so super, but who are seen as ordinary mortals. These days, everyone wants to be a celebrity or be known to be associates of celebrities, and celebrities too also think they are more than as they are as either next to the creator or something close to it in rank, probably for their wealth and fame.
Haven't celebrities conquer the space here? President Barack Obama as a celebrity, shot into political limelight and became the United States' president with the power of celebrity. The same is now applicable to Donald John Trump, who will be sworn into office on January 20.
​    The difference between Obama and Trump as celebrities is that they belong to two differen political parties. Obama ran for office against John McCain at a time that the beauty of the Republican Party was in tatters and that gave Obama a head up for his vcitory against Mccain. The victory was obvious to be swung in favor of the Democratic Party candidate before the votes, unlike the case of Trump, who observers thought ran against Hillary Clinton, a Democratic Party's super star, whom observers thought would not lose election under any circumstances.
Now the world of celebrities is in a division between the Hollywood stars and the non-Hollywood stars, because of political party affilliations, and the candidate that the Hollywood super stars thought would win the election lost it. The Hollywood super stars are wealthy and well connected in the society and the media, and they are flaunting their wealth to stage a counter ceremony, which news reports say they believe will take away the shine from the Trump's January 20 inaugaration as president.
Why all these struggle against Trump's victory at the polls? People say the struggle against him has started before his victory. And they ask whether it is necessary for the struggle massed with propanganda of the type one never thought existed? Will it this struggke between celebrities of different colors and persuasions lead to full employment, erase inequality and poverty or put food in the ordinary man"s table? These are the questions that ordianry people are asking as they go about their daily cores, discussing events in the political landscape, worried about astornomical rise in rent and prices of commodities amid stunted wages and endless toiling for survival.
The obvious in the political parties standing today, they say, is that the Republican Party has regained the preeminence position of  the Democratic Party eight years ago, and the Democratic Party has taken over the Republican party's misfortune of eight years ago. They say it is a case of the impermanence of human conditions and entities, and that whatever we are at anytime, whether celebrities or ordinary folks, is vanity upon vanity, with a reference to the book of Ecclesiastes in the holy book.
They say we have been born with nothing and that when we leave we will take nothing, saying that experinces have shown, apart from what the good book teaches. They admonish everyone to do his or her own share of the job toward elevating the community, not with malice or envy for others, but with humility and a sense of service to humanity and to remember that no human person is perfect.