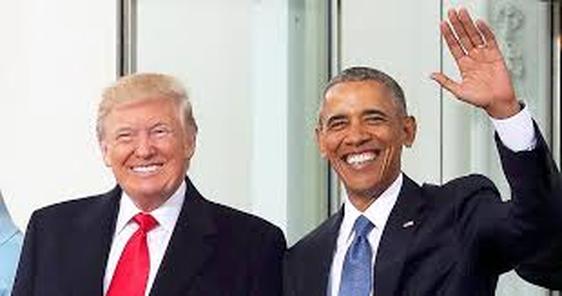 President Donald Trump and his predecessor, Barack Obama
The media was agog with the news of former President Barack Obama's return to the public glare after a spell, following the end of his presidency.
First in the list of his engagement happened at the University of Chicago on Monday, where he was reported to have said that he would use the platform at the university to teach young people about leadership.
Obama was once a teacher of Constitutional Law at the University of Chicago. It was a return to his home base politically and as a teacher.
It was where he began his political career as a community organizer. But reports did not say Obama would teach Constitutional Law or community organizing in the university, but how to lead.
Will Obama be like Socrates, whose undertaking was teaching young people philosophy and how to uphold the truth against the untruth at the highest echelon of governance? Certainly, no one expects Obama to teach young people that if any of them happens to be president, blind opposition to the Congress that is on the opposite side of the political divide, based on political ideology will be a good idea.
Already, the public has been told what Obama would not do. He will not mention President Donald Trump's name. Outside not mentioning Trump's name, what seems available to come from Obama's leadership teaching will be the opposition of the Congress to his leadership as a president anf his own recourse to the use of executive power to assert his authority. Most of us who may have thought Obama will appear at street corners, like Socrates in Greece, will be disappointed that the former president will not go anywhere close to interacting with ordinary people.
The closest Obama was to the ordinary people was during his life as a community organizer in Chicago. A repetition of that experience is not expected from his new undertaking. Possibly, since he was a lecturer in Constitutional Law before he became a community organizer, it should not be completely ruled out, the former president may travel his way from the University of Chicago, where he will engage young people on leadership, back to the community and begins to organize again.
If anything, the Democratic Party seriously needs Obama's grass root organizing knowledge and experience, tp help the party out of the ground, which the last loses in elections due to seeming lack of organizational acumen,have placed it. it is not also clear the dimension that Obama's leadership training to the youths will take, unlike Socrates that the world witnessed and learned how he taught young people at street corners about how to ask questions ceaselessly without wavering.
Did Socrates pursued public office in comparison to Obama? It is here that the difference between Socrates and Obama is glaring. Socrates never became president of his country, though he had the opportunity, unlike Obama who seized on the opportunity and became president. Socrates chose teaching young people to ask questions and that was a threat to the leadership,
Socrates was arrested and charged for treason. He had the opportunity to escape and be alive to rub shoulders with the powerful and the mighty, but he chose death, because according to him it was better to die to go to heaven than to live here. He saw no need wasting his time to change the unchangeable in the world. Unlike Obama, who promised change, had the opportunity to effect the change, but spent his years in office struggling between effecting the change and the powers opposed to his change.
Obama is no longer in office. His time is over to try to effect any change as an individual, if he cannot do that through the Democratic Party. The ovation cannot be like at his emergence on the political scene, especially going the way of making big bucks from speeches as a private citizen.
​