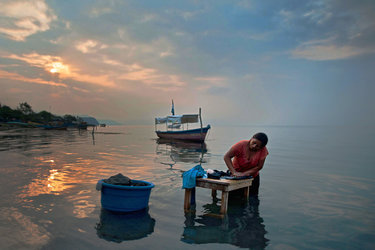 A woman washing on a table in the water (Courtesy: www.nytimes.com)
"He comes a long way. God only knows. God makes his plans. The information is not available to the modern man. We work our jobs, collect our pay." - Paul Simon in "Slip Sliding Away".
This photograph here was published in the New York Times few weeks ago. The photograph reminded me about my past, my beginning and the struggle for survival b -y my family and later by me. The table is in the middle of the water and the woman is washing a piece of cloth with a bowl containing other clothes on the side.
The same way that my father and me washed on our different tables in water at Oduduwa College, Ile-Ife, where my father worked as a laundryman. I washed along with my father, because of what destiny imposed on me from lack of money for school fees.
For about six months or longer in 1970, I took over my father's work as a laundryman, when he had a bad foot and could not work, and the battle to keep the family going fell on my lean shoulders at the age of 16. But because my father had shown and taught me how to do the work, just like he had made other his other children by making us to work with him anytime we were on holiday or out of school, I had mastered the job and it was not a big deal that I did it alone, when he was indisposed.
Having the photographs of that time would have been very valuable today, but at that time little time or attention was given to photographing such situations. Although my father had some photographs of himself washing in the water, but many of such photographs got lost with time. When I worked with my father as a laundry boy in the college, I saw children of the rich and those who could pay their children's school fees attending school, but I was out and my future was uncertain.
When eventually I got an admission into Oduduwa College, I was flogged almost to death for inability to pay school fees and that ended my time in the school and my struggle for survival began. I had foreclosed ever acquiring college education, after I had passed the high school equivalent in the ordinary and advanced levels as a private candidate; had my first child writing my ordinary level and had my second child writing my advanced level. The hope for a journey abroad was temporarily terminated with my eldest brother's assassination with a letter bomb in 1986, with both of us still working on a possibility for me to travel abroad for studies, before his assassination as a successful journalist and a prolific writer..
But in 2002, the opportunity for a journey abroad came and I seized with it. The eventual journey abroad that year paved the way for the acquisition of college education, which I had missed during my growing up years in Nigeria. I went through college, working about 60 to 70 hours weekly, cared for my immediate family and and gave timely attention to my mother. I could not have been able to do all that, if my father had not taught me hard work. He has the credit for whatever I am today and whatever I have achieved.
I have learnt the hardest way that hard work does not kill and that it cannot kill, but that it teaches a hard lesson about how to survive in most difficult situations. Sure that most of the students and people who knew me when I worked along with my father at Oduduwa College may not recognize me, if they have the chance to see me today. Because like a proverb that says that when a child is born, the child too has to renew his own birth, from time to time, I have gone through the process being  born again several times through hard work and resilience.
And I will always love my mother for her support and her love to see me grow, develop and not get killed by hunger as a young boy. In 1972, when there was no way of continuing formal education and all sources of fees closed from Lagos to Ibadan and to Auchi in Edo State, I sought my father's permission to leave Ile-Ife to Lagos, where I began my struggle as a 19 years old boy. Glory be to God, I am surviving with a degree in English and postgraduate degree in Journalism from Mercy College and Hofstra University, New York.
I worked as an Iron Bender/Fixer with Technoexpostroy in Lagos, when the company was building the Eko Hotel in 1975. I began work in the hotel as a Bedroom Steward after the construction work ended in 1976 and I joined the Daily Times of Nigeria's Advertisement Department in 1979, and I also wrote for the newspaper and other newspapers before I left Nigeria. In the United States, you have to do all sorts of works, from car wash to security, construction etc, for survival.
NEWS AND FEATURES
News & Features Around The World