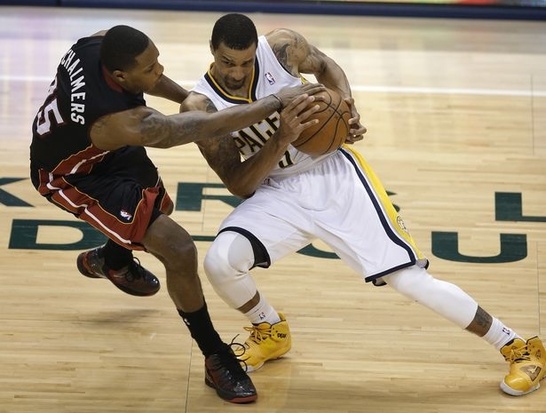 A fierce struggle for ball possession (Courtesy: media.cmgdigital.com)
﻿  The Indiana Pacers narrowly survived defeat in the hands of Miami Heat in the fifth game of the Eastern Conference basketball final on Wednesday. It defeated the Heat 93-90 in the game played in Indianapolis.
Despite the Pacers' victory, the Heats is still leading the finals by 3-2.
Many spectators had anticipated the Heat would wrap up the game by defeating the Pacers in the fifth game.
But the Pacers fought hard and turned the table against expectations.
Pacers led scores from the first quarter with the Heat pursuing and leveling in the second quarter 24-24 and later shot ahead of the Pacers.
The third quarter witnessed a grit to grit play, both team struggling to outpace one another with the Heat having the upper hand.
However, the Pacers came into the fourth quarter with determination not to allow the Heat end the game for them in the fifth game. The Pacers' struggle paid off with a shot to the lead with almost ten points; the Heat played to catch up and turned the game into a tight battle.