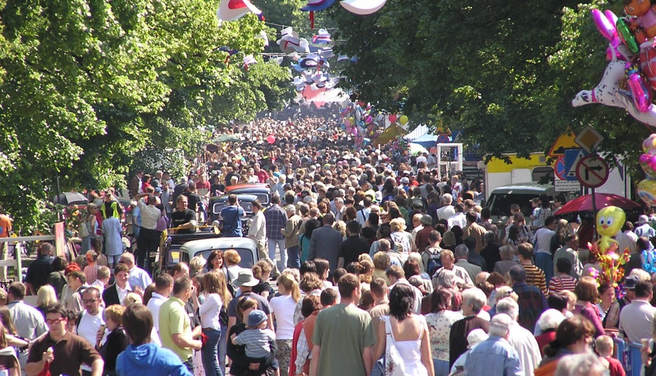 A crowd on the street and determining what anyone can do is difficult (Courtesy: The center for information technology)
There is something I know about some people, who don't like anyone getting into their business. When  you ask questions or you become too inquisitive concerning them, they would ask you, why are you getting into their business.
It is how it should be. One's private matter is one's. Unless invited, others should not try to dabble into what are others private issues. But unlike me, not everyone has learnt to be themselves - not minding to get into other people's business uninvited.
I had learned to always be myself, ever before I found myself living in a gun society or advanced society, where everyone is free to own a gun. Being myself means not getting into other people's matters. Aside from not getting involved in other people's matters, even in matters that I am supposed to be involved, I isolate myself as soon as I notice any sign of trouble or altercation. It is the best way to avoid trouble.
Therefore, before I arrived in the United States, I had learned to mind my own business and avoid matters - whether mine or others that could lead into pursuing to kill one another. I tell people all the time that if anyone steps on my toes on the street, I will apologize for the infraction, because the person who has stepped on my toes may wrongly think I  have stepped on his or her toes.
My reason for being extra careful in dealing with people in the private and public is that one may never know what is the stranger's pocket, even if the fellow is your friend, since he has not told you about what he or she has in his or her pocket. You don't expect anyone to come to you to get authority to put a knife or a gun in the pocket.
It is what many people do here. People get gun permit, but not so for knife. You have a gun which you are supposed to keep in your house for self defense and should not have it on you in the public, but people do things their own way, regardless about what the law says. If you say you are claiming a right on the street to a fellow whose state of mind you don't know, and he or she brings out a gun or knife after you, you may land in the other side of the planet, before the law enforcement will begin to piece together what may have led to the altercation.
Many of us have forgotten or careless that we live in a human society with rules of engagement, guiding human interactions, towards achieving a peaceful existence. But differences in human characteristics and difficulties in determining what is in people's minds, have made law enforcement a necessary option. Keep your gun in the house. you have no right to carry a knife in the public. They will tell you the knife too is for self protection.
The complexity of the human society has made trusting others difficult. It the same reason that is responsible why the Church that is supposed to be a place of worship has become in many cases the house of rogues and there is no so much difference between the Church and the Mosque these days. Didn't Jesus Christ drove out those he said had turned his father's house into a market?
Politicians want us to see them as angels and that whatever they tell us is the truth. But the world knows better. The billionaires wants to rule having their guys in power. And when their guys fail to make the election, they turn the fire on the winner of the election, and they have money to organize protests and demonstrations, and their own and their friends' media to do their bidding.
These same billionaires were the ones who had the means to travel to other lands to do business and bought slaves .for their sugar cane plantations. How would any poor man have traveled to anywhere and sit with those morally bankrupt kings, who gave away their subjects as slaves in exchange for money and fire arms, and later said they were forced to sell!
Life is difficult already, but politicians have made it more difficult. Not to worry, just learn to sing to delight yourself, the same way that those slaves have sung on their way to the new world, irrespective of the pain of the journey.
HTML Comment Box is loading comments...
NEWS AND FEATURES
News & Features Around The World