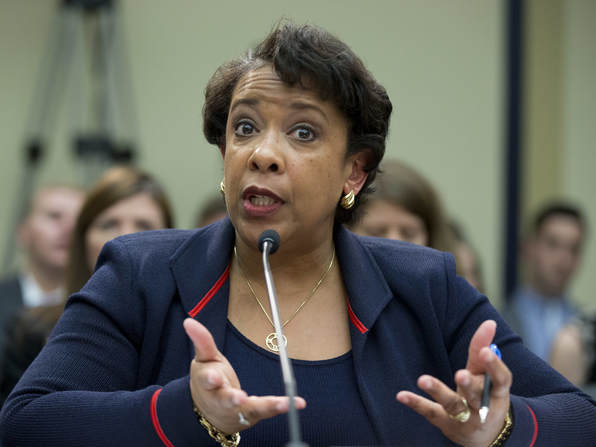 Former Attoney General Loretta Lynch
Loretta's Lynch's interview by law makers raises a question about what to be gained in her role in the investigation into Hillary Clinton's use of a private email as secretary of state  ?
Lynch was United States' attorney general during the events leading to the 2016 elections. Americans have not quite forgotten her impromptu meeting with former President Bill Clinton in an aircraft in Arizona.
At the time, Hillary Clinton was a presidential candidate, and she was under investigation for using a private email during her tenure as secretary of state.
The meeting by President Clinton and Lynch on a tarmac, not matter how brief - shook the nation, with many people believing that the meeting between the former president and the attorney general was capable of affecting the outcome of the investigation in favor of Hillary Clinton, a presidential candidate.
Yet, Lynch did not recuse herself from the investigation of the private email use by Hillary, despite the barrage of criticisms of her meeting with President Clinton on the tarmac. And then an uncertain forward and backward dance came into the investigation of the private email use by Hillary Clinton, which many people believed negatively affected the outcome of the presidential election against her. Comey's FBI reportedly sidetracked the attorney general and cleared Clinton of wrongdoing, and again announced another disclosure about a need to look again at the email use.
Many people believed that Clinton lost the election due to several factors that included the investigation into her use of a private email during the elections.. But the issue that her use of a private email has been underplayed in comparison to the role that the Russians alleged collusion in the elections may have played is a big issue. Anyway, Russians act is an illegal act against the country, regardless of its impact on the candidates.
Many observers believe that it does not seem that there would be any usefulness in the lawmakers interview of Lynch as head of the Department of Justice during the 2016 election other than see the role she may have played in the free pass granted Hillary Clinton for the use of a private email, bleaching to conceal and allegedly destroying a trove.
Comey has blasted President Trump, the Republican Party and the Fox News for his own performance problems. The nation would see who Lynch would blame for her own. Already, it is being said that her meeting on the tarmac with former President Clinton was an ambush to embarrass her as the attorney general, and the the former president knew that meeting with the attorney general, while her wife was under investigation was wrong.  But Lynch had defended her meeting with the former president on the tarmac as normal because people they in the DOJ do meeting with people connected to investigations all the time and that what they don't do is discuss ongoing investigations.
The reason to be powerful and rich and and be recognized and meet with anyone. Former President Clinton have all the attributes in his grasp. And the reason everyone is struggling to be powerful and be recognized with influence over issues. Isn't it only the very powerful who will be under serious investigation and still hope to win a presidential election? Democrats are  positive in their ratings of Lynch.
​
Comment Box is loading comments...
NEWS AND FEATURES
News & Features Around The World