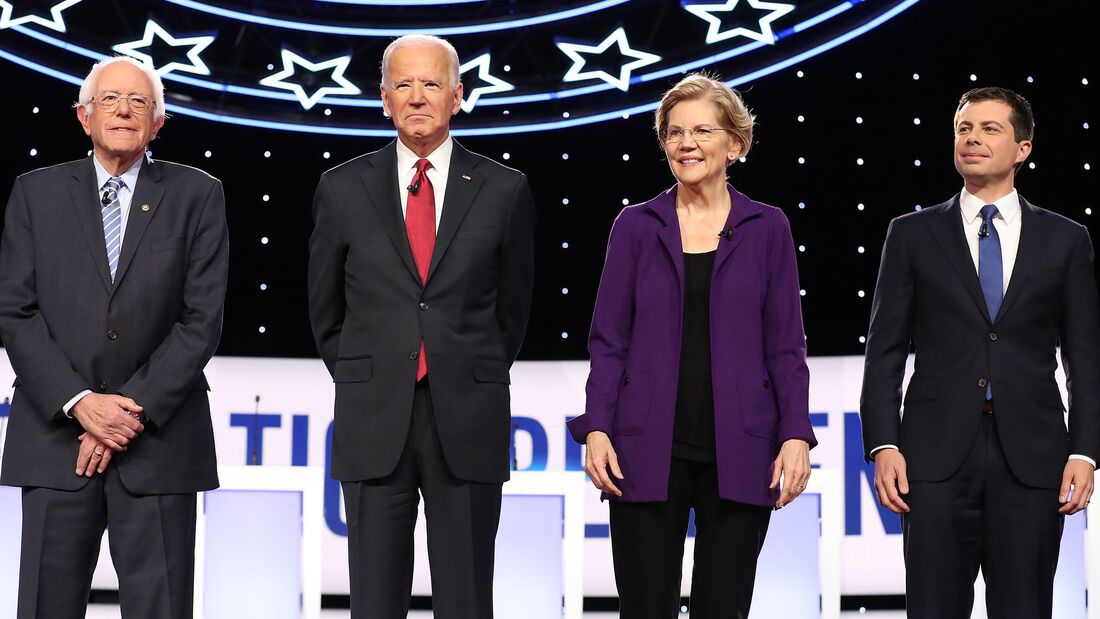 From right to left: Bernie Sanders, Joseph Biden, Elizabeth Warren and Pete Butigieg
Pete Buttigieg, former mayor of South Bend in Indiana, is rustling feathers and reminding political observers that perseverance and believe in one's strength can make a difference, by his emergence among top contenders in the Democratic Party's caucus result trickling from Iowa on Tuesday.
Buttigieg is the youngest of the pack among his party's presidential contenders. If he manages to clinch the Iowa's victory, his party would have found a solution to major problems about candidates who are too left leaning and those some in the party think are too old and should give the torch to the younger generation.
The early Iowa caucus results is shocking with Buttigieg pushing candidates like Bernie Sanders, Joseph Biden and  Elizabeth Warren to the second, third and fourth position respectively. Although, Sanders is reportedly leading the pack by 26 percent with Buttigieg at 25 percent of the votes, but Buttigieg has won more delegates than Sanders. If the result continues to favor Buttigieg as more numbers are released, an unexpected candidate may be in the offing for the Democratic Party. If Buttigieg wins in Iowa and can maintain the momentum, the victory may open doors for him in other states that the caucus will hold. It would mean a straight battle between one Buttigieg, 38, and other contenders like Sanders 77, Biden 77, Warren 72 and Mayor Mike Bloomberg 77.
It would also mean a new battle to overcome for President Donald Trump who is currently 72 and fighting for reelection amid consecutive battles by the Democratic Party to end the continuity of his presidency or make his reelection impossible. The emergence of Buttigieg would also spell doom for the four Democratic four your young women who call themselves "the squad" and who have pitched support with Sanders.
But the question continues to force itself about whether Buttigieg can pull through to earn a victory in Iowa. Political pundits are watching developments as the results are being released to see who would actually carry Iowa between Buttigieg and Sanders. The emergence of Buttigieg, 38, among top contenders in Iowa's caucus early results has enveloped the near failure of the caucus arrangement and the late release of results.
​        Can Buttigieg maintain the momentum? Would he not be crushed by seemingly more powerful candidate as more results are released?  Let us wait and see, as all the candidates congregate in New Hampshire, in search of support and votes. .
Widget is loading comments...
NEWS AND FEATURES
News & Features Around The World