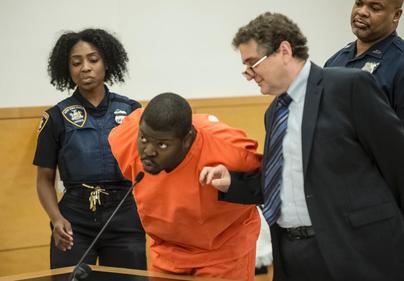 St. Hubert in court (Courtesy:New York Daily News)
Two men accused of murder at different time and location recently appeared in different court rooms in New York City, each ranting before the judge. The first case involved a man who was arrested in 2012 accused of killing three Brooklyn men in their respective stores. The second case is about a man accused of using a kitchen knife against a six years old boy and a seven years old girl in their apartment building elevator in East New York area of Brooklyn. He killed the boy, but mother-luck saved the girl.
According to news reports, Daniel St. Hubert who killed the six years old boy with a kitchen knife and and mortally injured the seven years old girl, sought to have audience with the judge.
"Your honor, is it alright if I have a moment with the court please?" But the law did not give him that entitlement to have another moment with the court, after he already had a moment with the court and indicted on killing an innocent boy, and savagely wounding a seven years old girl. His lawyer had said he intended to plead insanity. The question people are asking is that what kind of man will descend on two innocent children in an elevator the way Hubert has done.
Salvatore Perrone is standing trial for killing Vihidipour Rahmatollah, Isaac Kadare and Muhammed Gebeliah in their respective stores in Flatbush, Bensonhurst and BayRidge  areas of Brooklyn in a space of four months in 2012. According to a CBS news report, Perrone had told detectives that he gunned down his victims to promote world peace. The report also revealed the court documents showed that Perrone had told cops he was a CIA operative paid by Arab men to kill Jews.
The judge handling Perrone's case ordered a psychiatric examination of the accused following the latter's rejection of a court appointed lawyer for him.Two examinations were conducted and results of both said Perrone was mentally fit to stand trial. The report said he was not hallucinating and that he knew what he was doing. A report showed that Perrone tendered name of 49 witnesses; questioned why a certain paper had not been given to him and almost ordering the judge to give him the paper.
The question here is what kind of man will go about with a small box puled along from store to store, claiming to be a garment seller and gunning down men and leaving families and community in jeopardy. Now, news report say he is almost shouting at the judge to give him a paper. He has chosen to be his own lawyer.
Relatives of responsible family men he murdered in cold blood watched him holding the court to demonstration of rants, a comfort the court said Hubert had no entitlement. But a New York Post report said that the judge, Allan Marrus, had clearly told Perrone he would not help him prepare his defense and that if Perrone wanted to represent himself, he needed to follow up on matters himself.
Called 'Sal Perrone' by neighbors who have described him as erratic, difficult to deal with and has earned the name, has made people to ask whether he thinks by pleading insanity, he would be restored to go back and live in the community. Already, people have said that if St. Hubert has not been released from jail or is on medication, the life of the poor innocent boy he has killed would have been spared alive.