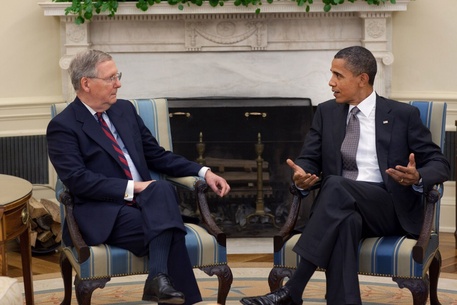 Mitch McConnell and Barack Obama
Do politicians get things done? Many people will say they don't based on what one hears people say about politicians irrespective of politics, climate and country. But politicians have proved that the world is all about racing and competition. Observers say politicians marvel the world with their preparation for elections, winning and losing elections and at times talking and talking out of proportion.
Winners will talk and tell the world how they have managed to win. And where the media approaches and have access to the losers, they also will give reason for losing and their plans to contend with the winners. Politicians seem to have no knowledge of the proverb that it is only an empty drum that makes noise and that a filled drum capable of something hardly makes noise.
Republican winners represented by  Mitch McConnell  and the losers represented by President Barack Obama have made their post election comments. They both want to and will like to work together, but the partisan divide is still there, based on McConnell's statement, and President Obama's choice of areas he will like to cooperate with the Republicans and other areas he will do anything to have his way. The listening public know the two men are being truthful to the public as politicians who cannot do without antics.
The question some observers have asked is why can't these men for once bury their hatchet and decide to work together in the interest of the public and humanity? Someone has asked whether these know members of the public don't care about their ideological and political differences and it is why people go to the polls to cast votes and leaving other important things aside for almost an hour for that important civic duty? Another person said it is good they are aware the public wants them to work together, but their comments don't show they have got it.
Americans are clamoring they want to see their politicians getting things done like the founding fathers. Without getting things done, they say the founding fathers would not have been able to lay a solid foundation. Many Americans picture the founding fathers agreeing and disagreeing and arriving at decisions, some seeming ludicrous and others funny, but they their intention to serve humanity is still alive today.
People say President Obama was right for having agenda he holds dear to heart, which he doesn't want to forgo with his party's loss at the polls and that the loss has strengthened him. They say it would have been calamitous for him to capitulate and give up. Some are saying they know the president is an orator and have heard enough of him talking and talking. They say there is a time to talk and there is a time to do, and that this one of the time s to do. They say telling the world his intentions is not what is expected at this this time. They say prudence requires action and not words. They say the president ought to enter into talks with the Republicans and meet them at the center andante public all see the outcome of his effort.
Republicans have supporters with their own expectations, just like the president' s party. The public expect both parties will meet and table their expectations and in the course of discussions arrive at consensus at what is best for humanity. Will giving pathway to citizenship to undocumented immigrants solve the nation's economic problems and not encourage more undocumented immigrants to find their ways into the country, believing they will always be forgiven along the way? When both parties representatives meet and ask hard questions, answers will come and a way forward with it. The public don't expect one party to claim it has all the solutions.
The public is merely talking to politicians about how to get things done. But the public is at the same time worried about politicians' antics that have made their parties and themselves seemingly more important than the voters. Making many Americans skeptical of any positive results from the throwing away of Democratic leadership from the Congress.
NEWS AND FEATURES
News & Features Around The World