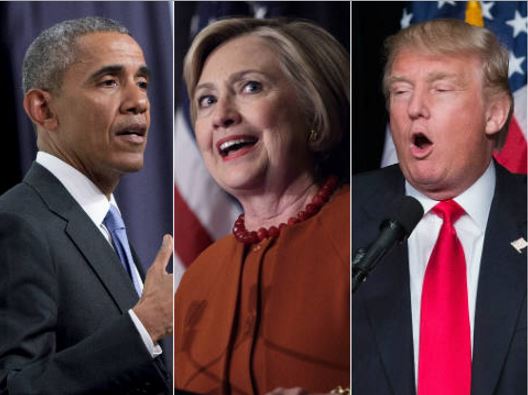 Former President Barack Obama, Hillary Clinton, loser in the last election and President Donald Trump (Courtesy: PoliticalUSA)
If losing election is a misfortune, which it is not supposed to be, then politicians are believed by the people as the cause of their own misfortune, anytime they lose election.
The relationship between the people and the politicians or elected representatives, are spelt out in the Constitution, and each is supposed to know own role, and not usurp each other's role.
But the politicians, have for a long time been usurping the people's role, not only in the United States, but all over the world. People' complain about the politicians' distrust, stretches from the United States to China and from South Africa to the Iceland and Russia.
A relationship that is supposed to be based on trust has been abused by the politicians, time and time again, and the people can no longer trust their own representatives, who have turned into owners with the owners make to suck and ask question about what has become their place in the scheme of affairs.
Political office holders have turned their offices to sources of personal enrichment and influence peddling. When they talk, they talk tough, but with eyes on the next election and not to advance the interest of the people, who live in the cities and the rural areas. At times, the politicians behave,as if only the city people have voted them into office and forget about the needs of the people in the rural areas.
Where total disregard for the needs of the people is not the issue, rampant corruption takes the front seat. The situation is worse in situations, where the Executive, the Congress and the Judiciary, have allied with the media, and there is no longer an independent  media acting as the fourth estate, holding public officers or elected representatives, accountable to the people, democracy becomes a farce.
Unlike the democracy in which reelection is based on people's satisfaction on the performance of their representatives. Rich individuals with political allegiance and who are owners of media houses turn their their employees into ideological players and will always play on the side of politicians in office with whom their publishers  are ideologically allied.
This development has put the trust of the media by the people in jeopardy. People say the media has become an instrument in the hands of the politicians and that the truth has been sacrificed in favor of ideological warfare. The talk is all over town and Journalism schools. Journalists are trained to know that they thread on dangerous paths and that some of them actually lose their jobs for calling proprietors bluff, to remain on the side of the profession.
Can anyone argue successfully against the adage that says he who pays the piper dictate the tune? Everyone knows that the problem that has deprived journalists of their freedom exists and that it affects the way of holding politicians and office holders accountable, but yet no one is addressing this issue and how to find a lasting solution the make journalists do their jobs, without becoming appendages of their publishers.
Consider the issue in the United States in the last presidential election. People in the cities approve the Democratic Party candidate, while people in the battleground states approve the Republican Party candidate, based on the development in the country, where government attention was city centered and people in the battleground states left behind. Yet, newspaper polls and writings favored the Democratic Party, all because most media houses controlled by publishers, who did not favor the Republican Party candidate.
First, he was hated by his own and most of the conservative media, until he had defeated all the Republican Party candidates, before he took on the Democratic Party.
Now that he has been sworn into office, President Donald Trump's government can sure of stringent scrutiny by the media, especially the liberal media. The Conservative media, having switched allegiance to him following his victory in the election. His government will gain from media scrutinies and will be able to avoid pitfalls that will dog him without such scrutiny, in a case that that the government and the media are allied and the media does not see any that the government is doing.
By taking on the media as one man volcanic critic , President Trump stance against the media as the Fourth Estate and the media promising stringent scrutiny of his government, is a signal for the restoration of the proper democratic culture, with the media playing its its role as the Fourth Estate. holding elected representatives accountable, unlike the situation in the last eight years, when the liberal media, now brimming with stone and hellfire, was allied  with liberal government and that government was praised and their time in power seen as their season of love, when they did nothing wrong.
NEWS AND FEATURES
News & Features Around The World