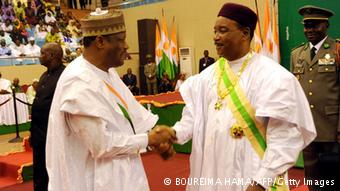 Amadou and Issoufou
This is unbelievable, but it is true! A presidential election is taking place on Sunday in Niger and a candidate who is challenging the incumbent is in jail, for baby trafficking.  Reports say that the challenger has denied the accusation against him, but he is still incarcerated.
The question then is whether a challenger, who has been put away by the incumbent, can pull a surprise defeat from incarceration.
Hama Amadou is challenging Mahamadou Issoufu. There is a widespread report that despite the challenger being in jail, the government is fully prepared to allow unregistered voters running into millions to vote by mere identification by members of the public.
​    What kind of election is this and in the 21st Century? Why can't the government just declare the incumbent as having no challenger? If indeed the accusation against Amadou is real, why cannot he be taken to court and the charge is find to be real and what is wrong in getting him disqualified?
Of course, Niger's streets are replete with photographs of demonstrations and bonfires, showing dissatisfaction among the populace. Both Issoufou and amadou are reported to have been formerly political allies before they fall apart.
Also in Uganda, reports say that Yoweri Museveni has won the presidential election and he is ready for his fifth term in office, but his challenger, Kizza Besigye, has said that the incumbent's is a fraud and he is challenging the election. Observers say that Besigye has his stars to thank for being alive to witness an election as a presidential candidate against the incumbent.
Although Besigye has lost the election, he has his life intact. But it is uncertain, if one of his eyes that has been reported to be near blindness, following a bitter encounter culminating from leading a demonstration against the government over rising cost of living and fuel prices, shortly before the election.
NEWS AND FEATURES
News & Features Around The World