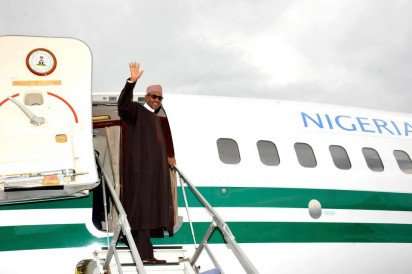 President Buhari alighting from the aircraft in Nigeria on Saturday after 103 days away from home
President Muhammad Buhari of Nigeria returned to Nigeria  on Saturday, following protesters's appearance at Abuja House in London.
For a whole week, Buhari's photographs and his aides appeared in newspapers around the world, with information about his health  in London, showing he was hale and hearty.
Buhari had told some of his visitors that his health had improved, but he still waited for doctors' approval to return to Nigeria. It is unclear if he has got the doctors' nod, prompting his return on home Saturday. No statement has been made about that.
However, observers are saying protesters' appearance at Abuja House in London, asking the president to return home or resign, after a week of protests in Abuja, Nigeria, may have prompted the president's sudden return home.
Femi Adesina, Buhari's spokesman said that the president's return home has nothing to do with the protesters' appearance at abuja House in London. He failed to tell Nigerians whether Buhari had eventually been given a certificate of fitness by his doctors, the only reason possibly behind President Buhari's sudden journey home, beside protesters' inconveniences to him.
Those Nigerian protesters must be happy that their toil has not been in vain. Their efforts to insert accountability in governance have been noted. Else, the president's spokesman would not have had any cause to fend off the impact of protests in Abuja and London, against Buhari's long stay away from work, due to ill health and his doctors' decision for the unjust imprisonment of the president in London.
Quite all right for the president's supporters and well wishers to celebrate his arrival back home. It was the wish of all Nigerians that he returned home alive. The rumors of death should not be blamed on the public, but on the secretive conduct of business surrounding the president's health condition, and the reason for seeking medical attention far away from home, for such a long period of time.
Now that Buhari has returned home, some Nigerians abroad are saying that Nigerians back home must ask about the cost of their president's long stay abroad for medical attention. Did the doctors' in London ethically delayed his return to Nigeria for a just reason or for the financial benefit to their own bank account?
They said that aside from the cost of the president's long stay in London and the likely high cost for medical attention, they describe  as uncalled for, travels by state officials to London, seeking to confirm the president's state of health and the truth of his aides' statements, that the president was well and that he was merely waiting for doctors' orders must not be lost.
These Nigerians said that those officials would not have headed to London, had the doctors' not delayed the president's return to Nigeria. They want the doctors and the hospital, where the president was treated in London to publish the cost of their service to the Nigerian people, and that the office responsible for the travel of the governors and law makers must do the same, for Nigerians to know the cost of those officials' travel.
They believe that gone are the days that Nigeria had money, but their leaders did not know what to use the money for. They say Nigeria no longer has so much money to fritter away without accountability. According to them, many children are out of school for lack of money, while lack of money has almost crippled social development, because of the fall in the price of oil in the international market.
Some Nigerians in New York said they would not be surprised to see their leader return to London for further medical attention! They said jokingly that he has only gone to show face in Nigeria.
​
NEWS AND FEATURES
News & Features Around The World