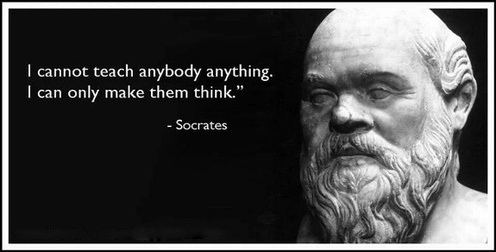 (Courtesy: www.thinglink.com)
Philosophers are interesting people to study. It is not certain if there are still philosophers who think and propound ideas like great Philosophers of yesterday. If they do, they cannot be of the same stuff, whom modern students learn about their craft in the classroom.
No college student or graduate of Philosophy will easily forget  the knowledge acquired studying the subject and its relation to religion, and the role that religion played in the evil plan against Socrates, based on the story told by Plato, one of Socrates' students and historian.
Socrates was accused of refusing to worship the state religion, but yet he said he was ready to die and he submitted to be killed, because he said the god that he believed did not tell him it was evil to die.
In the same class of Philosophy, students are taught about the two principal universal religions and other some other religions, which many people who have not ventured into the study of Philosophy lack the knowledge of the their existence, including the traditional religion.
All the religions, without exception, taught their adherents how to live pious and positive life, embracing various doctrines that are similar, but which are only different in presentation. Everything about the study of various religions relate to a statement in the Christian scripture, "The same yesterday, today and forever."
Nothing has changed. People still worship God and gods, and following different doctrines of their religions and religions still have very powerful influence on human lives, because of the connection humans believe it creates between them and the creator. And Atheists, whomt students of Philosophy also learn about, are still much around: Not believing in God's existence. The people who believe in religions and God's existence believe so much that Philosophers believe they are like people under the influence, like people who are under the influence of Opium.
In another class of study called Utopia, students read about the sharpness in the differences of lifestyles among people, who believe in God and the lifestyles of people, who don't. Students discover that Utopia life is what religions target to achieve in the lives of adherents and people outside the religions, and you wonder why people can live any other type of lifestyle outside religions teachings, when you of the the beauty that comes with moderation. And you arrive at the conclusion that some people believe and others don't, because it is a free world and that it has always been a free world.
The less freedom comes into the picture, when people with influence use their power to overshadow others without influence, the way the two universal religions have overshadowed the traditional religions, and giving Christianity and Islam larger than life existence.
But like it is often said that nothing lasts forever, the two universal religions too are already undergoing changes, but the Opium like influence that leads to intoxication that endangers the human society is still there. Religion currently has little influence in the civilized world, unlike in the Asian and African countries.
Understandably, the world is divided into the world of hedonism and asceticism; moderation and fanaticism. Though leaders in civilized world are still pretending there is a need to respect various religions and the ways of lives of their adherents, despite the danger that religion poses to the peace and tranquility. These leaders seem to fear that any policy that frowns on any religion may result into bringing out the worse reaction from religion fanatics.
Muslim fanatics that constitute Jihadists, and who are against the progressive values in the civilized world, lack civility and whatever that liberalism espouses; be it love, freedom, education and inclusiveness. They are in the opposite of Christianity and peaceful Islam, though they claim to be Muslims.
Peaceful Muslims have rejected Jihadist Muslims and their evil ideology. But is it just enough to reject them and believe that all is well with Islam? Is it also true, as some peaceful Muslims have said, that Islam does not teach Jihad? (To be continued)
NEWS AND FEATURES
News & Features Around The World