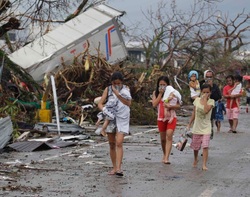 Survivors amid destruction (Daily News)
People in the Philippines are struggling to overcome the shock and devastation, which Typhoon Haiyan unleashed on the country and left death, destruction and despair behind it. One woman said she lost her husband to save their baby. Another woman revealed that she had lost 11 members of her family, including a two year old daughter.
For newspaper readers, it was a Sunday they woke up, saw and read "10,000 deaths from Typhoon Haiyan"; "Wasteland" and "Destruction" as headlines, describing what fate had forced on the Philippines.
The authority in Philippines says it is uncertain how many souls may have been lost, but certain about 10,000 may have been lost in just one location.
Now, lack of food, medication and home have become the lot of the survivors. People are shocked by increasing death and destruction from natural disasters with a question about why nature has become the most destructive to humanity, liking what happens each time there is a news of hurricane or typhoon to Matthew Arnold's writing in Dover Beach about the sea, the tide and the danger they constitute to human life.
The grating roar, the misery, the melancholy and Arnold's summation, "Ah, love, let us be true to one another! for the world which seems to lie before us like a land of dreams, so various so beautiful, so new, hath really neither joy, nor love, nor light, nor certitude, nor peace, nor help for pain and we are here like on a darkling plain."
Can the world ever forget the death and destruction that came with the Tsunami?  Every time there is a weather forecast about hurricane and typhoon, people are asked to leave their homes and seek safety where it may be available. And still the nature will come with such a force, sparing nothing on its path, killing and rendering people homeless.
In the United States, people sought safety in the roof of their homes when Hurricane Katrina slammed the new New Orleans; during the Tsunami in Indonesia and adjoining countries sought safety on top of trees just as many Philippines in a bid to escape the Typhoon Haiyan's wrath. As rich as the US is as a country, when the Katrina hit the New Orleans, countries both the rich and less fortunate ones rallied round the country; the same occurred when the Tsunami shook Indonesia and its neighbors. Today, it is Philippines' turn They need help. Information from Philippines reveals that help on the ground, but it is not reaching those who need it.
Widget is loading comments...
NEWS AND FEATURES
News & Features Around The World