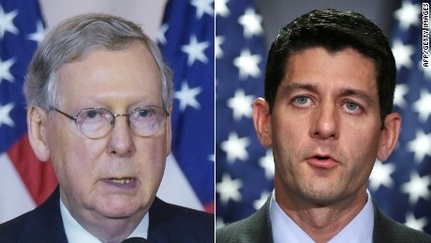 Mitch McConnel and Paul Ryan
Mitt Romney, the Republican Party's presidential candidate in the 2012 presidential election, said on Thursday that he cannot standby and see Trump take over the party himself and his father have helped lead. He said further that if Trump is allowed to become president Trump will imperil democracy in the United States.
These are Romney's words and it is difficult to see where a son and a father's role as owners of a party comes into a democracy. Romney and his father may have been leaders in the Republican Party, the but party belongs to the American public and not to Romney or any individual for the matter. Voting in elections belong to the voters, who decide who their choice is among those who have presented themselves for elective offices.
Rather than for those who have found themselves in position of leadership by privilege and a right as citizens of the great American nation to seek to manage issues by being proactive, they are seeking to cause trouble  for the future of the party they belong. The position taken by Romney who ended his own aspiration in 2012 by carelessly making a statement deriding the poor in favor of the rich after the Republican voters nominated him and stood by him did not show he understand the definition of democracy. He has merely helped to confirm what many people have been saying about how special interests and secret financiers have taken over the control and management of the country's politics through backdoor manipulations.
It is something of a shock to see a candidate on a debate podium telling another candidate that the candidate cannot be president, because he has a disagreement with the candidate the way that Jeb Bush began the end of his run for the president. Candidates have the rights to disagree with one another, but no candidate has the power to decide the candidate that will be the voters' choice.
No family owns America and no family or members of any family has the right to arrogate to themselves the candidate who will be the ultimate voters' choice. Is not it funny to hear that some people have been arrogating to themselves the judgement of who has the temperament and who does not and that they have the power to approve the person they agree with his or temperament to be president and the disapprove the one they disagree with his temperament to be president?
Jeb Bush said he has the temperament to be president, but the voters have told to him to go home, and they have decided to embrace Trump, whose temperament human gods in the Republican Party have repudiated. Have these human gods carried out a medical examination on Trump to arrive at their decision that he is psychologically unfit to lead?
How did they arrive at their decision? Is not this not part of human bias in which some people were adjudged unfit to lead in this country in the past, because of the color.of their skin? Is it not in recognition of the past struggle and breaking of the deadly human control and bias that makes President Barack Obama's election as the first black president a watermark in the life of the country?
Trump's accusers said he accepted KKK member's endorsement, but on the other hand they are also in the same shoes that they have accused the KKK.  Although, Trump and his supporters said that Trump had not elaborately accepted the endorsement in question.
No matter, his accusers have devised all the means at their disposal toward ensuring Trump does not emerge as the party's nominee and they are reported to be working behind the the scene to achieve their aim to disenfranchise the electorate and make Ted Cruz and Marco Rubio, the two Cuban Americans - president and vice-president.
The media is reporting that Trump is now seemingly unstoppable, but the human gods in the party have not stopped their scheming and part of it is Romney's decision to stage a war to stop Trump. He has said he cannot imagine supporting Trump.  By their decision, Romney and his ilks have shown that they have no respect for the voters' choice. Many observers are saying that this should be seen as just a Trump's problem or Republican Party's problem. They view the Democratic party members making jest of what is happening to Trump as another partisan divide in the American politics.
The public expects all well meaning Americans to shout down the Republican Party bigwigs' effort at truncating the party. They are saying that 1948 is far from 2016 and they believe that America has advanced far beyond allowing family political dynasties to call the rules. Many people think and believe that what is happening should not be seen as just a Republican Party problem. They say that if the Republican bigwigs' intention, whose Public Relation works Romney is doing is allowed for any reason, the Democratic Party may not be far from getting into the same mess that the Republican Party is currently enmeshed. And that if it is allowed to happen, the voters will be the losers.