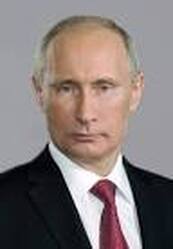 Vladimir Putin
Russia announced  the discovery of a vaccine for Covid-19 on Tuesday. And Vladimir Putin says he has allowed one of his daughters to be vaccinated with the new vaccine, as part of verification for the vaccine. However, unidentified scientists around the world are questioning the veracity of the Russian vaccine.
According to reports, analysts are saying the reported vaccine is still to undergo the third stage of testing that often takes months to be concluded. This has led to suspicion that if indeed the vaccine news from Russia is real, there must have been some corner cutting to arrive at this release stage to warrant health and other essential service workers in Russia have been lined up to be vaccinated.
People are quick to question Putin's remark about the testing of one of his daughters. They say why not all members of his family including himself. Does he mean to say his vaccinated daughter is the most important person in the world? They cited Donald Trump's recommendation of Hydroxychloroquine and how he took it himself to explain to its usefulness to Americans.
​   Despite questions over the Russian Covid-19 vaccine, Putin is sticking to his decision that a vaccine has been delivered by his country, leaving the world to observe whether the Russian vaccine will be accepted to other countries, in a world where people are already expressing negative sentiments against vaccination for Covid-19.
Before the news of the Russian reported Covid-19 vaccine breakthrough, there have news in the United States about a vaccine research heading that is towards a possible breakthrough and all that remains is for the vaccine to undergo the require three stages of testing.
Therefore, it is reported that the vaccine by  Reddit said to be in collaboration with Oxford University in the United Kingdom will not be ready until sometime towards year end. Many people are saying that since we are in competitive world, it will be dependent upon the people in charge of science in each country around the world the vaccine they will allow to be used in each country.
It is not clear whether the World Health Organization will be of any use here, because of the diminishing trust for the organization's handling of the Covid-19 crisis from the beginning. Undoubtedly, some countries who are in cahoot with WHO may accept any vaccine that ma be approved by WHO, and countries no in cahoot with WHO will look the other way.
For example, people think it will not be problematic for China to accept Russia's vaccine, while it could be problematic for the United States, because China and Russia are in cahoot, unlike the U.S. that the politics has been poisoned by Russia and politicians in the country are suspicious of Russia of readiness to do anything to undermine the country's democracy.
Comment Form is loading comments...
NEWS AND FEATURES
News & Features Around The World