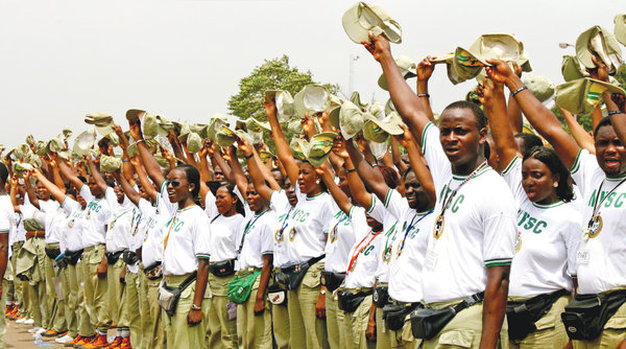 Nigeria's Corps members at a parade
I was excited to get into the National Youth Service Corps orientation camp in March 2012, for the three weeks orientation program enforced on Nigerian university graduates, having graduated in Sociology from Crawford University, Igbesa, Ogun State in 2011.
My first posting was to Jigawa in the northern part of the country. I dreaded attending the orientation in Jigawa due to Boko Haram crisis in some parts of the north at the time, which had claimed many lives of corps members around the region.

As a result of Boko Haram’s social menace and threat to lives, I deferred my service to February 2012 to enable me transfer my posting to Lagos State, where I was eventually posted for my assignment. The orientation began in March 2012 at the orientation camp in Agege area of Lagos. I arrived at the camp with mixed feelings for what had been said by ex-corps members. I said in soliloquy that whatever happens during the service, survival will be most important.

Camp life was fun and hectic at the same time. Meeting with different people from different parts of the country-culture mix- one of the main purpose of the service, made it an interesting experience to look forward to. Having to wake up at 0400hrs for morning drill along with challenging accommodation situation wasn’t normal. We go back to the hostels after the drill, freshen up for some few minutes and then come out for lectures.

The lectures help a lot at establishing the reasons about why as youths we need to empower ourselves skillfully and intellectually. We were told that the morning drill, evening parade and other stressful activities were targeted to prepare us for the labor market and the stressful world. It was a case of all work and no play makes Jack a dull boy. There were other programs organized by corps members and officials. Artists came and entertained us. There were dancing competitions, beauty peagent, talk shows, dance drone and cultural shows.

At the end of the orientation, we were given posting letters to different places of primary assignment, with an eye on a new law made in 2013 that corps member will not be posted to private organizations. This was against the expectation of most members who hoped for an experience in a private organization, because they pay more than government jobs. The reason given for discouraging posting to these firms was that they accept corps members, use them for a year and dump them at the end of service year. The law wasn’t helpful as most of us were posted to schools, others to government offices and infrastructures.

The reason given for not posting corps members to private organizations was that the firms use corps members for a year and dump them at the end of the service year. However, the new policy wasn’t helpful as 80 percent of members were posted to schools and the rest to government offices. Most of us ended up doing what were not in our lines of studies. The state government had provision for just 500 members and the rest were asked to register as voluntary members. And these voluntary members were expected to be present at PPA meetings every day.

Most corps members were treated like shit, especially in Lagos State. Many of us were rejected at our PPA, because attention has been shifted from posting to private organizations to government and the government could not employ all members. Resultantly, corps members rejected roamed the streets searching for PPA themselves. Many were forced to report back to the NYSC office. Obtaining a posting letter to the PPA they have found themselves entailed getting lots of documents signed. They ask you to go to that office as if it is in the back of their office and expects you to report back same day if possible, because everything has deadline.  We didn’t have a choice. It was something we had to do and with limited amount of money in the pocket.

I taught Social Studies in a school, begged the principal for a day or two off in a week to enable me attend to other important issues. But the principal refused most of the times, explaining that we were much like full time staff. There was no room for skill acquisition and professional training toward getting a better job after service toward developing our lives. Painfully, some corps members still found jobs in private organizations, defeating the law aimed at creating equality among members on posting to government offices alone.

The service year was hectic and stressful, but that would not be the reason for regret serving the country. The government should either restructure the service by getting its priorities right or scrap it altogether. The service should help youths develop their lives in all aspects of human endeavor, and not depriving them of what they would really have preferred to do. For lack of this objective, most corps members say, “They are just wasting our time. When we go out to look for job, they tell us teaching isn’t a working experience. Therefore, we are on our own.”

This isn’t in our favor. We spent four or more years and money to study in school, need jobs provision after service and not a market of unemployment.