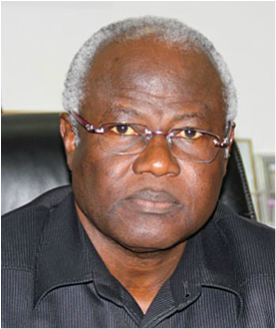 President Ernest Bai Koroma of Sierra Leone
A young girl sits in a pathway between a mud and a plastered house. Her mother, wearing a multi-colored dress stands with arms folded on her stomach helplessly watching her daughter who is separated  from her with a quarantined tape. The daughter reportedly died two days later.
The story is one of the new Ebola cases that have made many Sierra Leonians  go on their kneels in prayers for Ebola's death, following what seems like the evil disease's resurrection after a presumed demise.
The disease's new emergence after a lull has put government officials and many people in Sierra Leone at their wits end over new fears that the disease still exists.
Many workers who have worked hard during the Ebola peak period and who think they have survived the Ebola dread think about going back to face the danger of conti nued fighting a disease equivalent of death.
However, a New York Times report reveals that some public health workers seem to have no doubt that the disease can be defeated in West Africa, despite that continued traces of the  disease after a battle to end its existence.
The Times's story said that there are still traces of the disease in other countries like Liberia and Guinea, where the disease has high casualties at its peak. A health expert with Center for Disease Control and Prevention, Dr. Pierre Rollin, doubts that the disease will stop just suddenly.
One major problem that has become manifest in Sierra Leone in the fight against Ebola is the refusal among people suspected of having the disease to stay in quarantined area or go to health centers, where they say food supply is hardly consistent. And many of the fishermen among whom the disease has recently manifested have reportedly taken to the sea or prefer herbs than reporting to health centers.
These developments among others have made fighting Ebola a harder assignment for health workers and student volunteers against Ebola.
NEWS AND FEATURES
News & Features Around The World