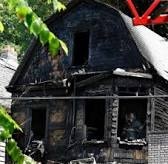 Six people were killed in an early morning fire that gutted a house  on Father's Day in Newark, New Jersey. Graphic photo from TV news report showed that the fire started suddenly from the basement of the building and quickly spread to the top of the building in a twinkle of an eye.
No cause had been given for the cause of the fire that burnt the house down completely; killed a mother, her son and four others. The mother and her son were said to be on a visit from Georgia.
A grandmother to the boy killed in the fire said she had just buried the boy's father, and lamented the tragedy of having to bury the grandchild and his mother soon after her bereavement of his father.
NEWS AND FEATURES
News & Features Around The World