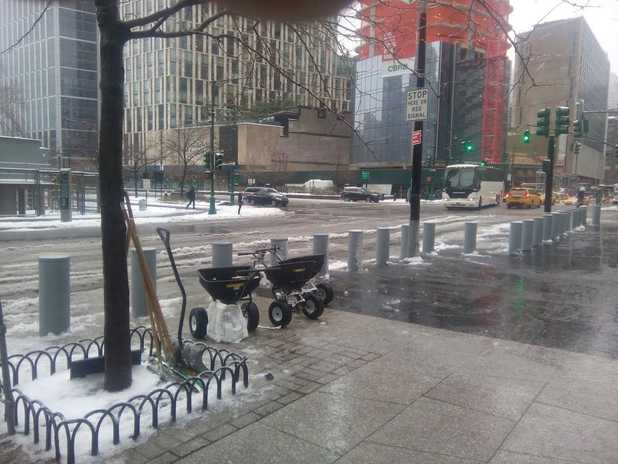 The photograph, taken about 11:00 am, shows the emptiness of the streets, equipment for spreading salts to dissolve ice on the ground and the messy streets.
It is cold and extremely cold too in some parts of the North East of the United States. It is not just cold and extremely so, it is windy and rough outside, and walking outside is like getting into a tussle with the wind.
And when you are driving, you feel like the wind is almost taking the car off  the ground.
People talk about the brutality of the weather, when it snows and begins to rain at the same time. They say the roads become hard to travel and makes a megacity loooks like a village.    As it is currently the situation. It begins snowing about 03:00 am and the rain begins about 08:00 am.
For many parents and their children, it is good that today is Saturday. School children will be home. There is no fear of anyone going on harms' way.
​    Even if not on Saturday, people say that many school districts would have chosen to call off school, to allow mother nature has its way without putting people on harm's way..
When the weather becomes unfriendly, no one wants to venture outside. The streets are deserted and few people one see are those on esseential or important missions - going to or coming from work. It has taken the fervor out of the weekend.
It seems like no one will seek or go on leisure, when the sky is heavy with cloud like it will rain cat and mouse. The roads are unmotorable and walking becomes like gliding through broken glasses. It also means that the beaches are no go areas.
The large number of tourists people always see clinging to their cameras during fine weather days cannot be seen going around during snow and extremely cold days. One can hardly see anyone, who says he or she likes the winter season, other than hearing people say, it is a necessity one has to learn to live with.
Although, the winter season, the accompanying cold and the snowing are novelties for people from countries that don't have the season, especially the maddening cold and the snow. There is always the hunger for the first snow they will see, no matter how the cold has made dressing with layers of clothes, hat and gloves, turn people into sudden masquerades.
In this part of the world, you have special clothes for the winter, special clothes for the summer and special clothes for the spring. You dare not wear the summer clothes in winter, unless you want to be sick and die of cold, people warn, becuase wearing summer clothes in winter will expose your body to excessive cold.
You have to dress up in winter accesories like you are going into a battle. Apparently, people say they are here to live and not sick or die. Three days ago, the cold was so frigid at about 21 degrees, but feels like ten degrees. People ran away from the streets. And those who are compelled to go on the streets sing a song of fire on the streets.
Holding thair palms and blowing it as if the palms have indeed being on fire. No one goes through fire unscathed. The same is applicable to going through maddeningly cold and frigid weather. This parly explains, why the homeless are taken off the streets, and are put in hotels to save lives.
NEWS AND FEATURES
News & Features Around The World