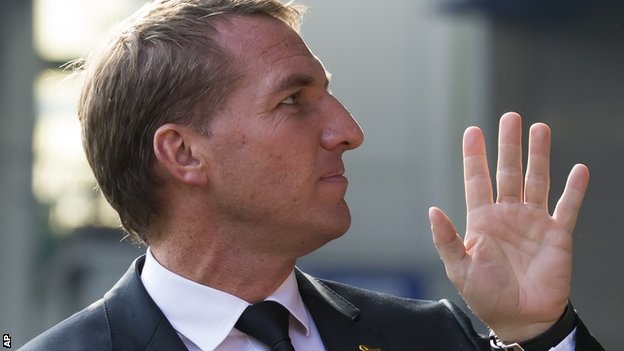 Rodgers bidding Liverpool bye (Courtesy: BBC)
​   Two major shocking managers' exits from two major English Soccer teams dominated the news this past weekend.
The news of Brendan Rodgers from Liverpool and Dick Advocaat of Sunderland checking out again brought the management of soccer as business and a game into debate.
Leaving their teams unceremoniously also highlights the difference between and losing, how winning is preferable to losing, and  how winning brings camaraderie and losing turns into the opposite.
Analysts have traced Rodgers' history of ascent and the journey into oblivion. The history, written by Phil McNuilty in the BBC, shows how in 2014, Rodgers was carried on a crest of euphoria. At that time, the writer said, it appeared sure that Rodgers a would be the first Liverpool manager who would win the title in 24 years. However, that did not happen with a 2.0 loss to Chelsea.
There was also what was called the infamous slip from Steven Gerrard. These developments were said to have set off a line that eventually leads what has turned into an exit. Advocaat's story in Sunderland is a little bit emotional, because his wife had told him not to a team he had earlier abandoned. But Advocaat returned anyway, and his stay lasted eight league games and ended with the 2-2 draw with the West Ham United.
One good lining in the horizon is Chelsea owners' identification with Jose Mourinho, despite the team's misfortune. How long the camaraderie between Mourinho and his bosses would last is uncertain. The reason is that losing is not what team owners bargain for, when hiring managers. They want victory all the way. It is why they hire the best players and spend fortunes on transfers.
When losing becomes what they get for spending such fortunes, they begin to look at the cause of their team's misfortune for a turn around. Questions begin to emanate as what may have been the cause of the misfortune. What is supposed to be a game in which the best performing team is supposed to win and be left at that has becomes a business deal. Fans expect their team to win too. It is all about sports as life and a game.
The life aspect of it is that what happens behind the curtain outside the field of play is not in anyway different to what happens in business boardrooms, where directors are concerned with how much profit their companies have made and how loses are to be avoided and return the company to profit making position.
Virtually all games have become top business in orientation, because players are highly paid. The American Baseball, Basketball and Football are in the same rank like soccer, in term of publicity and how the players are paid. the coaches are highly paid too. Every dude wants to lay one game or another, because it is easy way to become rich. None of these games is merely a game again, they are businesses and are highly monetized.