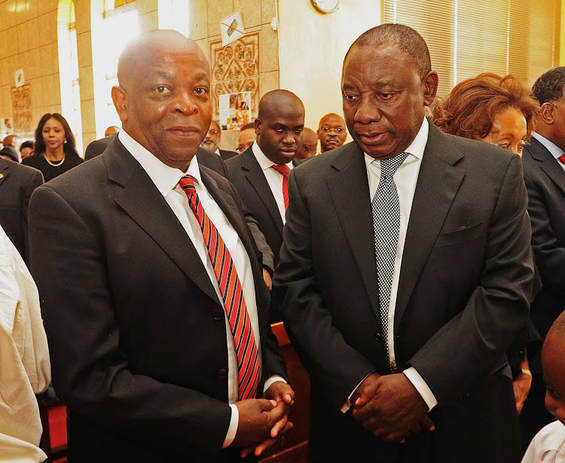 Ramaphosa (left) and Mamoepa (right)
It is the third sudden death of a star from around the world in similar circumstances related to heart issues.
First was the Russian who had helped his country navigated the introduction of the internet to his country, followed by Kenya's minister of interior and now by Ronnie Mamoepa, South Africa's vice president's press secretary.
Mamoepa was reported to have been down with stroke and he was in the intensive care in the hospital, when the news first aired late on Saturday.
Late On Saturday, news report said that when Ramaphosa visited him for the second time, Mamoepa was still in unstable condition, and the situation worried Ramaphosa, who prayed and wished for the survival of his press secretary.
But as the news said, another unconfirmed news had circulated about Mamoepa;s death. But Ramaphosa's visit and the news that Mamoepa  was alive. but in unstable condition helped killed the news of his death, temporarily.
By midnight, confirmation of the news of Mamoepa's death was published. Many South Africans went to bed on Saturday praying for Mamoepa's survival in his battle on Pretoria's hospital bed against death. Therefore, many of them were fast asleep when Mamoepa passed. They woke on Sunday morning to the news of Mamoepa's passage, arising from a stroke he had one month ago, according to news reports.
Described as a former political prisoner and a member of Guateng provisional legislature. He also served in the ANC and various departments of government. On Sunday, government officials, politicians and journalists began paying tribute to Mamoepa.
Joseph Nkasseiry died of heart related issue on July 7 in Kenya at the age of 67. Anton Nossik died in Russia on July 9 at the age of 51 of heart related issues. Mamoepa died in South Africa on July 22 of heart related issue at the age of 56. Nkasseiry's sudden passage raised controversies that led to a widely monitored autopsy, which confirmed that he died of heart failure.
Shakespeare wrote that death will come when it will come. But no one is certain how it will come. It was why Shakespeare wrote that cowards die before their death and that the brave experience death only once. And that of all the strange he has ever heard that seems most strange to him is that men fear death, given that death cannot be avoided.
However, just like Caesar was asked not to go out for the fear of death, because of the conspiracies against him by his enemies, the same way that humans are fearful today, whenever there is a news of health issues in relation to terminal diseases, among which heart related illnesses come top.
It is becoming certain and certain everyday that all will die, but how each person will die and what will kill each person, is what is uncertain. Sicknesses of different natures kill. People are shot and forced out of existence. People die in auto accidents and all forms of accidents.
Ramaphosa is highly favored to emerge as the next ANC's flag bearer in the battle for the heart of South Africa, and he may likely become the next president of South Africa. Why at this crucial stage of political transition to a higher level should a spokesman he has been accustomed pass so suddenly to the place beyond?