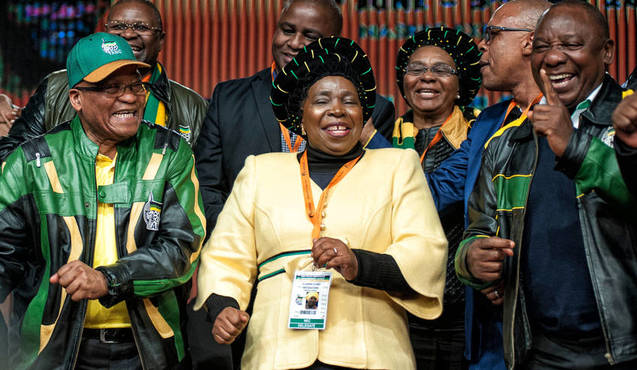 Jacob Zuma, Nkosazana Dlamini-Zuma and Cyril Ramaphosa
Nkosazana Dlamini-Zuma, former wife of President Jacob Zuma, could not have decided to vie for the ANC's presidency, to lose to her opponent.
But since in every election there must be a winner and a loser, she has emerged the loser, while her opponent is the winner.
The outcome of the election's result with Cyril Ramaphosa as the winner means the Zumas have lost the effort to retain power.
How the ANC goes forward toward the 2019 election will depend on the new leader's permutations about how the party will win the presidential election.
Although, the ANC is the majority party in the country with about 65 percent of the voting population, the party still has to ensure unity within its rank and file, to go into the election with assurance of victory. With the Zumas strong support among the black population, in spite of the corruption allegations and Ramaphosa as his second in command in office, Ramaphosa will need to tread with caution to retain a popular support among both black and non black voters. And he cannot afford a disunity within the ANC, which may result from a hard line against President Zuma.
Good that Ramaphosa has bared his teeth against corruption and that corruption will no longer be tolerated, especially among themselves who are leaders of the ANC - a statement many observers see as a rebuke of Zuma's years as president and leader of the ANC. Ramaphosa still requires a rare wisdom to manage Zuma' s corruption allegation crisis, to ensure a safe journey for himself as likely presidential candidate for the ANC in the 2019 elections.
But it is obvious that the Zumas have lost a large political power with Nkosazana Dlamini's loss of the ANC's leadership election. For her, there is no hope of becoming the country's president in 2019, against the real reason she vied for the ANC's leadership position. The loss also represents a roadblock to whatever assistance she could offer President Zuma to navigate the likely investigations and the legal battle arising from corruption cases.
The rotten foundation laid by President Zuma as leader of his own country is what has deprived his former wife's aspiration and his own peace of mind as he prepares toward the end of his time in offfice. The woman is highly qualified as she had said in her own words that she is academically qualified in term of her academic attainment. And people also talk about her experience in office as an asset.
But the power she has sought to be able to empower South African women and other struggling people seems to have slipped away for now. And the Zumas have no choice than to begin a postmortem about how, where and what actually happened to reduce them to a level of powerful people that the electorate want out of power.
It is not difficult to see what the present situation in South Africa poses to the Zumas as President Zuma second in command, Cyril Ramaphosa assumes the party's leadership and hoping to be the next president. The only saving valve for the Zumas is that Ramaphosa may not want to disgrace Zuma out of office.