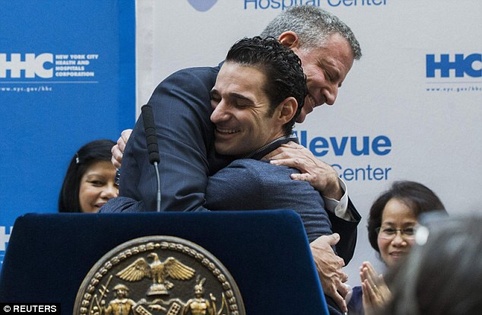 Mayor de Blasio hugs Dr. Spenser at the occasion
Dr. Craig Spenser, the Doctor without Borders' member and  Ebola survivor, has called world attention to the Ebola's devastation of families in West Africa.
"My case May banner international attention, it is important to remember that my infection represents just a fraction of the more than 13,000 cases reported in West Africa, where families are being torn part and destroyed," the doctor said in a short statement at a ceremony honoring him in New York City, after his discharge from the Bellevue Hospital on Tuesday.
Earlier he said he cried whenever he saw children who were too weak to survive Ebola died, and that he expressed joy whenever his patients survived the scourge.
Before his speech, he had been hugged by Mayor De Blasio and his wife - Chirlane McCray and others, who rejoiced with the doctor's conquest of untimely death, something observers said would have been impossible before and after his admission at Bellevue hospital, considering the fear that Ebola had planted in the minds of people and its effect on human fellowship.
Tuesday's ceremony followed Dr. Spenser's full recovery and a certificate of fitness from the Bellevue Hospital where he was treated.
At the occasion, Mayor de Blasio acted the Master of Ceremony, where he declared The doctor a hero, and poured encomiums on Dr. Spencer and Doctors without Borders for saving lives, especially Dr. Spenser for making New York and New Yorkers' proud for his act of selflessness to save lives in WestAfrica. He also seized the opportunity against stigmatization of West African people living in the city. He was supported by the city's commissioner for health, Dr. Mary Travis Bassett.
Throughout the occasion, Dr. Spencer kept smiling, looking into the camera, watching the mayor and representatives of Bellevue hospital and Doctors without Borders making their remarks about him, Ebola and the cure.
What became manifest was that everyone who had met Dr. Spencer had something to say about his notable sense of humor and a sense of belonging with patients.
NEWS AND FEATURES
News & Features Around The World