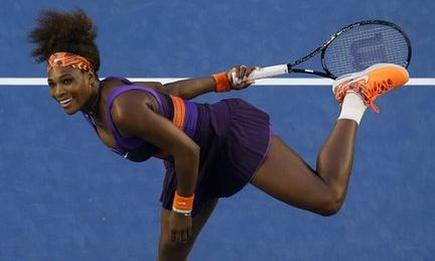 Serena Williams, almost qualified to be called the world's Queen of Lawn
Tennis, is beautiful to behold on the court when she is winning. But opposite
is her picture when she is losing. Pictures don't lie as the one above shows,
before her loss to Sloane Stephens at the Australian Open.
Ranked number 2 among the world’s women tennis players by Women’s
Tennis Association, and also Olympic Gold Medal winner, Serena Williams
may also be ranked number zero in anger management. After losing in the
quaterfinals in the Australian Open, Williams was reported and shown
banging her racket on the court, in hot anger.
Some may have called her a sore loser, but observers said it wasn’t just
hand-eye coordination that caused her loss. They said she injured her ankle
during the first match. Still the 31-year-old who has won 30 Grand Slam titles
played against 19-year-old Sloane Stephens, a rising star in the tennis world.
Stephens, ranked number 17 in the WTA rankings and may continue to rise
after her upset defeat of Williams.
Observers think William's loss to Stephens caused her anger, but they think
Williams seemed to be unbothered. But the problem they say is that
spectators watching the match often feel that slamming rackets to the floor is
unprofessional.
Williams walked away with a $1,500 fine which is a bit lower than the $2,000
fine back in 2011 when she verbally attacked an umpire at the U.S. Open.
Tennis fans haven't forgotten how at 2009 U.S. Open she was fined $82, 500
for misbehavior, and her loss of point in a game against lineswoman, later
champion, Kim Clijsters.
People say Williams obstructive behavior has cost her a lot of money which
may be nothing compared to the amount she gets for playing. That’s probably
why throwing a temper tantrum here and there doesn't seem to  make any
difference.