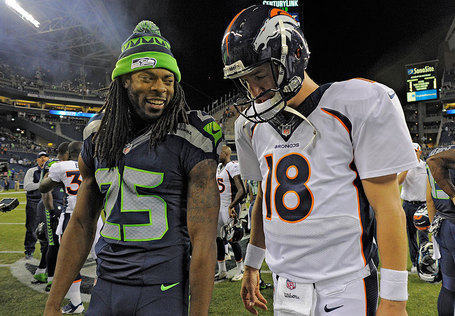 Sherman and Manning (Courtesy: John Lebya- Gettyimages)
This Sunday, all eyes will be on Peyton Manning and Richard Sherman as the Denver Broncos take on the Seattle Seahawks at MetLife Stadium. After reaching the super bowl for the third time in 16 seasons, Peyton Manning looks to win his second title.
“Last year, I felt like a visitor the entire time,” Peyton told CBS sports. Oh how things have changed. Having arguably his best season ever, Manning threw for 5,477 yards with a record high 55 TD’s this season.
Richard Sherman however, feels the star quarterback may be a bit overrated. “His passes will be accurate and on time, but he throws ducks,” said Sherman in a column on MMQB.com
Either way, Sherman, arguably the best Corner in the league today, and the Seattle Seahawks have a raunchy defense that simply won’t let up. The Broncos however, have Peyton Manning and a number of receivers that can get it done. “I’ve thrown a lot of yards and touchdowns with ducks. I’m actually quite proud of it.” Peyton said regarding Sherman’s comments.
This Sunday, we’ll get to see if Daffy or Donald will get him the BIG WIN!
Although the game will be played in New Jersey, it feels like it is being hosted in New York City.The New York and New Jersey States have definitely benefitted as hosts. And if you have about $1,500 to spend, you might even get a ticket to the game. Ticket prices have fluctuated over the past few days as New York weather hasn’t made it out of the teens, however, the forecast thus far predicts sunshine and the high 40’s on Super Bowl Sunday, so get your tickets fast!