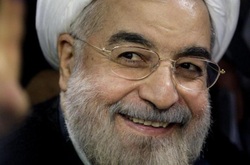 Rouhani (Courtesy:www.aljazeera.com)
Just as the UN Security Council members were about to conclude their agreement in New York City on Syria’s chemical weapons, the Tunisian president, Moncef Marzouki, made a passionate appeal to the Iranian president, Hassan Rouhani, for an end to the nightmare of the Syrian people.

Published by Reuters, Marzouki’s call represents the most strident appeal amid efforts toward destruction of weapons to save Syrians. “We have to stop this; find and reach a political solution.”

He expressed optimism that President Rouhani will help. Marzouki’s is concerned more about saving Syrians, whose population is faced with increasing decimation and a large number living as refugees in Lebanon and Turkey.

But there is skepticism that Rouhani may face sanction from Mullah’s at home for his Holocaust’s condemnation. But as the president on whose table the bucks stop, Rouhani is proving he is his own man, and that he will be answerable only to himself.

However, some are saying Rouhani is proving to be a smooth tactician. He had said what some people here in the West wanted to hear, condemning the Holocaust. But in what seemed like a flap, he insisted on continuing enrichment of uranium. As a matter of fact, he says “It is our right.” And he continued by saying that Israel too has nuclear weapons, and that Israel should give up its nuclear weapons.

His standing by his words that the Holocaust was real shows a man who hates human suffering and condemnable, signals a president who can be relied upon to sway Bashir al-Assad toward peaceful resolution, but that is if the rebels or freedom fighters will agree to a peaceful resolution. But the confusion in translation from home means Rouhani is ready to walk the tight rope between home and abroad.

Rouhani has won an open door in the West and his foot is at the door. It remains to be seen whether he is Ahmedinejadi in a different shade and color as some pundits are saying. Will Rouhani play a different role in Syria in comparison to his predecessor?

The irony is that ordinary Syrians are caught in between the two powers like grass that is trashed on the ground between two fighting elephants. People think it is time all efforts be made toward helping ordinary Syrians escape this fratricide the same way that efforts toward destruction of the weapons have been conducted.

As if Rouhani heard the concern expressed by Marzouki, he opened up the following day and said he did not want Syria to be like Afghanistan. He expressed support openly on Assad's side. He gave the calculation of political set up of Syria and the danger the Sunni moslems constitute, the role they had played in the conflict in Afghanistan and their current role in the Syrian disaster, and stressed international coalition and political solution as the way out. But when and how soon?

The world expects that the powers that have put the resolution of the destruction of the chemical weapons together will address this as quickly as possible, as a way to save from humanity from the destructive picture that has emerged from Syria.