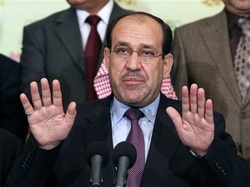 Iraq's prime minister, Nouri Maliki, has admitted terrorists' capture of Monsul, and says the city's fall into the hands of militants has been caused by conspiracy. But as Maliki admits the northern city's fall, Tikrit - another city in the mid-region (Saddam Hussein's birthplace)  and a shouting match from Baghdad, has reportedly slipped into militants hands.
According to BBC report, President Malik said in a televised TV address that there had been conspiracy in Monsul and part of Nineveh province. He said some people deserted and failed to defend the country. He vowed Iraq will fight the insurgents and demanded the parliament declare a state of emergency.
Observers say that the case in Iraq is not about a guerrilla warfare, where militants hide somewhere, despatch suicide bombers for attacks or attack cities from hideouts and run away. They say it is about effective occupation, where they may soon set up their own government and administration to administer the cities. They cite what is happening in Somalia as an example of the fate that has befallen Iraq.
In Somalia, miitants control almost half of the country, while African Union, AU, and the United Nations are in Mogadishu and other border ares near kenya, Djibouti.
In Nigeria, Boko-Haram has asked for introduction of islamic rule and has declared a war against the country for refusing its demand, carrying out guerrilla warfares. It has seized over two hundred school girls it is holding as hostages for the release of its members Nigeria hold as prisoners.
NEWS AND FEATURES
News & Features Around The World